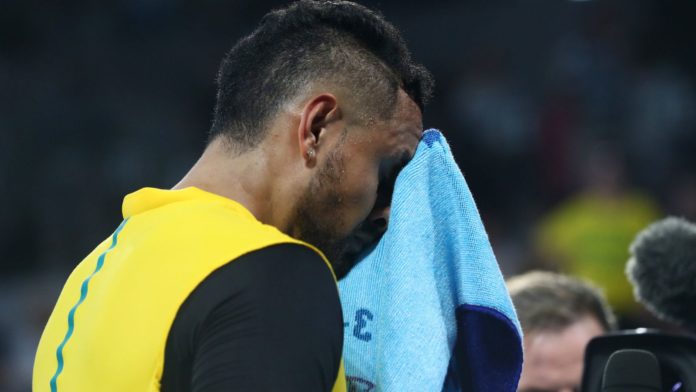 “It’s a real thing and you know, it’s bigger than tennis”

Nick Kyrgios was brought to tears over the catastrophic bushfires currently ravaging Australia, after his opening ATP Cup win over Jan-Lennard Struff on Friday in Brisbane.

Kyrgios is donating $200 Australian dollars for each ace he hits in tennis events held during the home summer season to help those affected by the bushfires, while fellow players have also pledged their support.

More than 1,000 homes have been destroyed by the fires fuelled by searing temperatures and high winds, with Kyrgios’ hometown of Canberra experiencing its worst air quality and residents have been told to stay indoors.

We’ve got the most toxic air in the world at the moment so it’s pretty sad.

”I just think we have the ability and the platform to do something like that and obviously my hometown is Canberra, we’ve got the most toxic air in the world at the moment so it’s pretty sad. So yeah it’s just tough,” said Kyrgios.

”We were at the team dinner yesterday and I just chucked up a tweet. Went for my food and then (Alex) de Minaur did it and (John) Millman did it, and then Peers’y (John Peers) and I woke up this morning and, you know, everyone got behind it.

“Tennis Australia, we’ve organised something for Wednesday night, not too sure how it’s going to work but it’s all going to all the families, fire fighters, animals, everyone who is losing homes, losing families. It’s a real thing and you know, it’s bigger than tennis.”