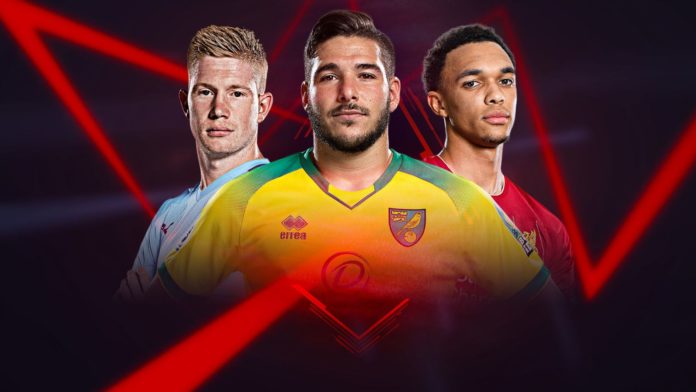 Sky Sports and Budweiser, the official beer of the Premier League, have teamed up to bring you the weekly Power Rankings.

Norwich midfielder Emiliano Buendia tops the first form chart of 2020 and becomes the first member of Daniel Farke’s side to hold the summit since Teemu Pukki’s two-week run at the start of the season.

The Argentine notched his seventh league assist this term to tee up Todd Cantwell’s fourth-minute opener in a 1-1 draw against Crystal Palace – only Trent Alexander-Arnold and Kevin De Bruyne have created more goals this season.

And that pair slot behind Buendia this week, with Alexander-Arnold switching places with De Bruyne to claim runner-up spot after both players produced impressive displays in wins against Sheffield United and Everton, respectively.

Mohamed Salah (No 6) breaks into the top 10 after his opener at Anfield, while stopper Alisson (No 9) also climbs with his fifth successive clean sheet as the Reds maintained their 13-point lead atop the table with a game in hand.

Wolves winger Adam Traore retained his No 4 spot despite a 2-1 defeat at Watford, with man-of-the-match Gerard Deulofeu breaking the deadlock to surge 26 places up the chart.

Southampton maintained their stunning reversal in form to beat Tottenham 1-0 at St Mary’s, thanks to a sublime goal from Danny Ings, extending his league tally to 13 this season – assisted by Jack Stephens (No 8).

In terms of each club’s top player, Brighton winger Alireza Jahanbakhsh enjoyed a remarkable New Year, scoring his first goal for the club against Bournemouth last week and netting again to salvage a 1-1 draw with Chelsea midweek.