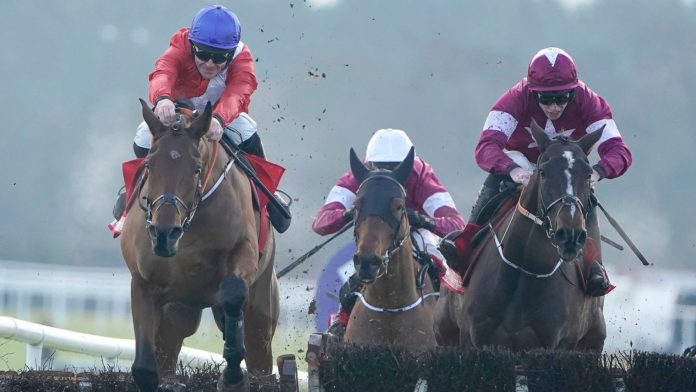 Envoi Allen is the star name among seven runners declared for the Lawlor’s Of Naas Novice Hurdle.

The Gordon Elliott-trained six-year-old was bought by Cheveley Park Stud for £400,000 after impressing in his sole point-to-point, but has lived up to his hefty price tag thus far by registering six successive wins under Rules.

After rounding off last season with victory in the Champion Bumper at the Cheltenham Festival, Envoi Allen has made a seamless transition to hurdling this term – dominating on his debut at Down Royal before claiming Grade One honours in the Royal Bond at Fairyhouse.

With that form having been well advertised since – most notably by the runner-up Abacadabras landing the Future Champions Novice Hurdle at Leopardstown over the festive period – Envoi Allen will be a red-hot favourite when he steps up to two and a half miles on Sunday.

Elliott has a second string to his bow in Conflated as he bids to claim this prize for the third time in the last four years.

Willie Mullins has saddled no less than seven previous winners – and this year relies on Elixir D’Ainay, who was last seen winning a maiden hurdle at Naas on early November.

The runner-up that day was Martin Brassil’s Longhouse Poet, who has since gone one better at Navan and renews rivalry this weekend.

The most interesting race on the under card is the Irish Stallion Farms EBF Novice Chase, which looks a Graded race in all but name.

Tornado Flyer bids to make it three from three over fences as one of two runners for the Mullins team along with Cash Back.

Pat Fahy’s Dunvegan looked the part on his chasing debut at Punchestown, while the Emmet Mullins-trained Zero Ten makes his return to action, having been off the track since winning at the Galway Festival last July.