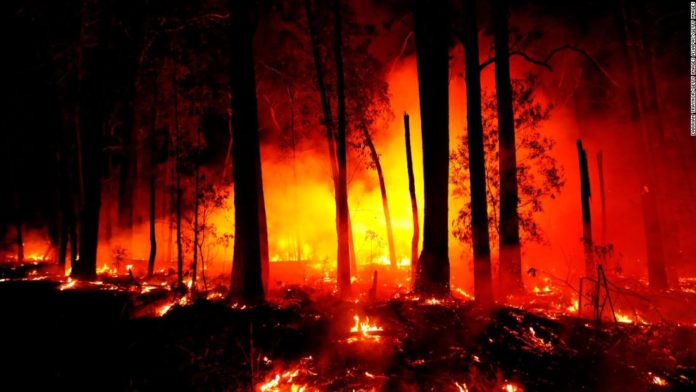 The Australian Defence Force (ADF) sent navy vessels on Friday to the fire-threatened town of Mallacoota, in Victoria state, where thousands of people fled their homes and sought refuge on a beach earlier this week. More than 960 people will be evacuated on Friday to Western Port, south of Melbourne, the ADF said.
Photos from Mallacoota show people wearing face masks and lining up to board the vessels, with the air blanketed in yellow haze and smoke.
The state’s premier Daniel Andrews warned residents in similar fire-stricken zones to evacuate, warning on Friday that “we cannot guarantee your safety.”
Authorities in neighboring New South Wales state are also urging residents to abandon entire towns that lie in the path of intensifying fires. Already, some towns have been virtually burned to the ground — across NSW, 1,365 homes have been destroyed and more than 500 damaged this fire season.
The town of Batlow, home to more than 1,300 people, is forecast to be hit Saturday and “will not be defendable,” warned the NSW Rural Fire Service on Thursday. “It is not safe. Do not be in this area.”
The announcement sparked an outpouring of grief and sympathy on social media, with many mourning the possible loss of the town’s beloved fruit orchards — Batlow is one of Australia’s major apple producers, and agriculture lies at the heart of the community.
NSW is under a state of emergency, and Victoria has declared a state of disaster in six areas, ahead of worsening weather conditions forecast for Saturday. Meteorologists predict extremely hot, dry, and windy weather — a dangerous combination that hinders firefighters and makes the fires spread quicker and farther.
Similar conditions on Monday and Tuesday led to a devastating 24 hours that destroyed hundreds of homes and killed seven people. In total, 18 people have died across Australia during this fire season.
Weather conditions have improved slightly Thursday and Friday, and authorities are now racing against time to get people out of fire-threatened areas before the situation worsens again Saturday.
Highways were jammed for hours on Thursday, with fallen trees and fire danger closing down major roads. Many people slept in their cars overnight, parked on the highway, waiting for the roads to open so they could evacuate loved ones in isolated areas.
Canberra resident Penny Tynan waited at a road block outside the NSW town of Nowra for 10 hours on Thursday, frustrated and anxious. Since Monday, she hasn’t been able to contact her mother, who lives in a nursing home, or her 14-year-old autistic daughter, who was visiting.
“We want to pick her up and get her out of there before Saturday,” Tynan said. “She’s autistic, she would have been terrified.”
As of Friday, 127 fires are burning in NSW, of which 67 are not contained. A total of 2,100 firefighters are on the ground in the state. In Victoria, 28 people are unaccounted for — a jump from 17 reported on Thursday.

All three services of the ADF — the army, navy and air force — are working with state authorities on emergency response. Apart from the naval operation at Mallacoota, the ADF has also provided aircraft for water bombing and air evacuations, and army personnel for ground support, helping ease some of the pressure on firefighters.
Prime Minister Scott Morrison said on Friday that federal agencies are also working to set up evacuation centers and provide accommodation to evacuees.
“This is a ferocious fire,” he said. “We are doing everything to support (people affected) in this time of need.”
But Morrison and his administration have faced heavy criticism for their response to the fires. Many are also angry that he had taken a holiday in Hawaii in December as the blazes raged — which he ended up cutting short, and apologized for.
Morrison was heckled and cursed at on Thursday when he visited the fire-hit NSW town of Cobargo, in what was supposed to be a visit with victims.
One woman said she would only shake his hand if he gave more funding to the NSW Rural Fire Service. “It’s all coming,” Morrison said, shaking her hand. He then walked away as she called after him, “We need more help.”
Another group was more explicit, yelling out “you’re an idiot,” and “you’re not welcome.” Morrison left without responding.
When asked about the confrontations on Friday, Morrison said he had “stood with” the woman in discussing fire service support, and that he had been “pleased” to see the community’s resilience.
“People are angry, I understand,” he added. “People have suffered great loss. They are hurting and raw, that is what happens in natural disasters.”
Morrison has also been accused of not doing enough to address climate change, which experts say is making natural disasters like fires go from bad to worse. Summers in Australia are always hot and dry — but fire seasons have been arriving earlier and spreading with greater intensity, and weather conditions are growing more extreme.
“I certainly haven’t seen anything like this before,” Angela Burford, spokeswoman for the NSW Rural Fire Service, told CNN on Friday. “This fire season in New South Wales is something that is certainly unprecedented.”
Morrison acknowledged on Thursday that the climate crisis has affected fire seasons in Australia — but cautioned that the government needed “sensible” policies, and that there wasn’t “a single policy, whether it be climate or otherwise,” that could completely protect Australia from the fires.