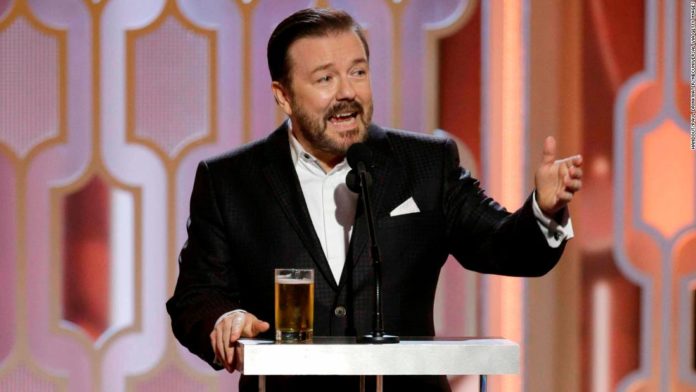 Declining ratings for award shows have prompted various responses, including the Oscars’ much-discussed but ultimately rather successful host-free format last year. Kicking off the latest flurry of back-patting leading up to that crowning event, the Globes — which air Sunday — have chosen to stick with a host, while trying to foster a sense of danger around Gervais, in an encore to his four prior appearances from 2010-12 and again in 2016.
Lest anyone have forgotten — and clearly, NBC and the Hollywood Foreign Press Assn., the small group of roughly 90 journalists that selects the awards, are hoping people haven’t — Gervais’ past routines demonstrated that Hollywood doesn’t always have much sense of humor when the jokes come at its expense. Playing a bit like a cross between Don Rickles and Jimmy Kimmel’s “mean tweets,” his comedy targeted, among others, Mel Gibson, Caitlyn Jenner (or more specifically, her driving after a fatal car accident), Tim Allen, and the cast of “Sex and the City,” among others.
The main rap on Gervais was that some of the material sounded “mean-spirited,” as Robert Downey Jr. described it after his introduction — which cited the actor’s history of substance abuse — in 2011.
In the intervening years, Gervais has only honed his reputation as a comedic provocateur. When criticized for his material, he has returned to the argument that comedy can’t be safe or designate areas as completely off-limits.
“People like the idea of freedom of speech until they hear something they don’t like,” he recently told the Hollywood Reporter, adding, “When people say, ‘He crossed the line,’ I say, ‘I didn’t draw a line, you did.’ It’s relative. It’s subjective.”
The question remain whether an awards ceremony — one whose significance is largely tethered to the celebrities that attend — is the ideal place for administering such a lesson or engaging in a debate about the subjective nature of comedy; still, Gervais has been perfectly upfront about his approach, which he insists is in good fun and ultimately about entering the audience at home, not catering to the black-tie crowd in the room.
One of the challenges in booking an Oscar host has been that it now seems like such a thankless task, with logical A-list names shying away from being placed under that microscope (see Kevin Hart’s experience), in a “Life’s too short” manner.
To the extent that a host’s contribution is, largely, to generate media attention and provide potential viewers with some inducement to watch in the first place, Gervais — who boasts a loyal core of fans and 13.5 million Twitter followers — has already accomplished what the Globe organizers set out to do.
As for the response when — more likely than if — Gervais ruffles some well-adorned feathers, any protestations of surprise from NBC or the HFPA will have less credibility than a fictional character’s long-ago assertion that he was shocked, shocked to discover that gambling was going on at a certain Casablanca café.
The Golden Globes air Sunday at 8 p.m. ET on NBC.