Home Sport Your rugby union team of the decade 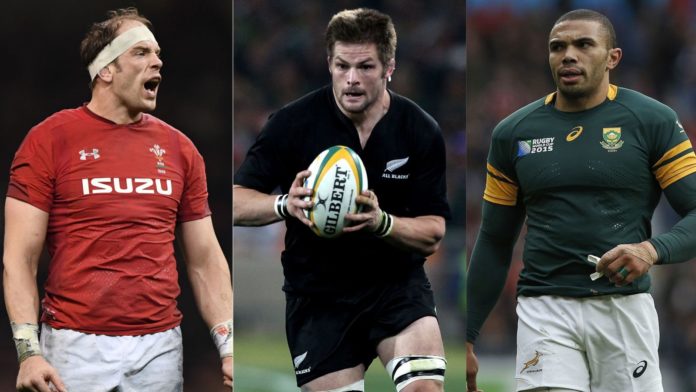 We gave you four options per position, from full-back to loosehead prop, and put it to a vote to crown a XV from the last decade (2010-2019), where we enjoyed three Rugby World Cups and two British & Irish Lions tours.

See the results of your voting below…

Taking your full-back slot in the rugby union team of the decade is former All Black Dagg. The 31-year-old retired in April 2019 due to a knee injury, but had been a mainstay of the New Zealand and Crusaders lineups since the beginning of the decade.

Dagg was pivotal during New Zealand’s victorious 2011 Rugby World Cup campaign, as the All Blacks finally got over the line to win rugby’s holy grail again for the first time since the inaugural tournament in 1987.

The full-back featured five times, including starting and playing the whole final, while he also scored five tries at the competition.

Dagg would feature in 54 more Tests after that World Cup for New Zealand, all starts, as he became a central part of Steve Hansen’s set-up.

Taking your right-wing q slot is another All Black in Ben Smith, who has unquestionably be one of the best and most consistent performers of the last 10 years.

Though featuring at full-back too, Smith has performed just as regularly in the 14 shirt, during which he was central to the 2015 Rugby World Cup success and clinched six Rugby Championship medals.

In your outside-centre berth, Ireland’s O’Driscoll gets a hefty portion of the vote to take the 13 shirt.

O’Driscoll toured with the British & Irish Lions for a fourth time in 2013, while he finished his Test career with Ireland by clinching the Six Nations in Paris in the final appearance of his international career.

With half the vote for his position of inside-centre, former All Black Nonu takes your 12 shirt.

Unlike Dagg and Smith already in this team, Nonu can lay claim to the fact that he started both the victorious 2011 and 2015 Rugby World Cup finals – one of only 20 players ever to win more than one.

He finished his Test career after that 2015 World Cup, signing off with a fabulous 103 caps.

On the left-wing, there was only one option as far as the vote was concerned, as Springbok Habana dominated your vote for the 11 shirt.

In 2012, Habana picked up Currie Cup honours and was also named South Africa Rugby Union’s player of the year.

He retired from Test duty in 2016, finishing with a phenomenal 124 South Africa caps and 67 tries.

He may have missed the 2011 Rugby World Cup victory on home soil due to a groin injury, but Carter would recover to come back and star four years later as the All Blacks won the 2015 World Cup, and he was named World Player of the Year.

He moved to France after the 2015 World Cup, and lifted the Top 14 title with Racing 92 in 2016, before moving to Japan and winning a Top League title with Kobelco Steelers in 2018.

For much of this decade, the best scrum-half in the world tag has flopped between New Zealand’s Aaron Smith and Ireland’s Conor Murray, with the All Black winning out in your vote.

Smith has enjoyed a superb spell in black since making his debut in 2012, and has amassed 87 caps and 97 points in that time.

Your loosehead prop of the decade is another Rugby World Cup winner (2019) and our second Springbok in Tendai ‘Beast’ Mtawarira.

The prop seems to have been around forever, and through good and bad, he has turned out for South Africa consistently over the last 10 years. A wonderful servant.

He may have struggled with injury regularly in the latter part of the decade, but there was a time where All Black Coles redefined the role of hooker.

His skillset, playmaking ability, hands, pace and offloads were a joy to watch, and the 33-year-old was another who was central to Rugby World Cup (2015) and Rugby Championship success with New Zealand.

Coles just edges out Rory Best, who capped a fantastic career at the conclusion of the decade, having captained Ireland to a host of history-making days.

If Coles redefined the hooker role, then the same can be said for Ireland’s Furlong regarding the tighthead prop position.

The second Irishman in your XV, Furlong’s ability to excel at scrum-time, while also dominating in the loose has been remarkable to watch.

During this decade, Furlong was part of the first Ireland XV to beat New Zealand (2016) and the first to beat the All Blacks in Dublin (2018), he was the starting British & Irish Lions tighthead in all three Tests in a drawn series on New Zealand soil (2017), thrived as Ireland won a three-Test series in the southern hemisphere for the first time (Australia, 2018) and was central to a Six Nations Grand Slam title (2018).

Your first lock of the decade is All Black Retallick, and for many the Kiwi would be in with a shout of being the overall greatest player of the last 10 years.

The 2014 World Player of the Year is a critical performer for the All Blacks, and is a truly outstanding performer in most Tests he plays.

The only Welshman to make your XV of the decade, Wales legend Jones could hardly have been left out.

The 34-year-old is on 134 Tests caps and counting, and has had a decade to remember. He picked up six Lions Test caps, playing all three games against Australia in 2013 and all three against the All Blacks in 2017.

With Wales, he lifted Six Nations titles in 2012, 2013 and 2019 – two of which came as Grand Slams, and the latter which arrived under his captaincy as he was crowned Player of the Championship.

He also led his country to the semi-finals of the 2019 Rugby World Cup in Japan as skipper.

The only Wallaby to make your XV, the recently-retired Pocock has his name inked into the back-row, beating off 83-cap All Black Kaino, and two World Player of the Year winners in Dusautoir (2011) and Du Toit (2019).

Arguably the best exponent at the breakdown in the history of rugby union, Australia were always a vastly different proposition with Pocock in of the side.

An absolutely wonderful rugby player, and well worthy of his slot.

Along with old mucker Dan Carter, McCaw led the way with the most dominate vote result in your team, courtesy of a whopping 78 per cent to claim your openside flanker spot.

Within the decade in question, McCaw became the only player in history to have captained his country to two Rugby World Cup successes, lifting the Webb Ellis Trophy in 2011 and 2015 – the latter in the final rugby appearance of his career.

He also left the game as the sport’s most capped player of all time, having featured on an incredible 148 occasions for the All Blacks, while McCaw began the decade by clinching the World Rugby Player of the Year award in 2010.

In addition to World Cup glory, McCaw lifted Tri Nations/Rugby Championship titles with New Zealand in 2010, 2012, 2013 and 2014 in this decade, while he was also part of an All Black squad which completed a perfect year in 2013: winning all 14 Tests from 14.

And finally, New Zealand’s Read takes the No 8 position in your vote for rugby union team of the decade.

Winning over half the votes for his jersey, Read retired from Test duty following the most recent World Cup in Japan, captaining his side to third and finishing on 128 caps for the All Blacks.

Read was also named World Player of the Year in 2013.