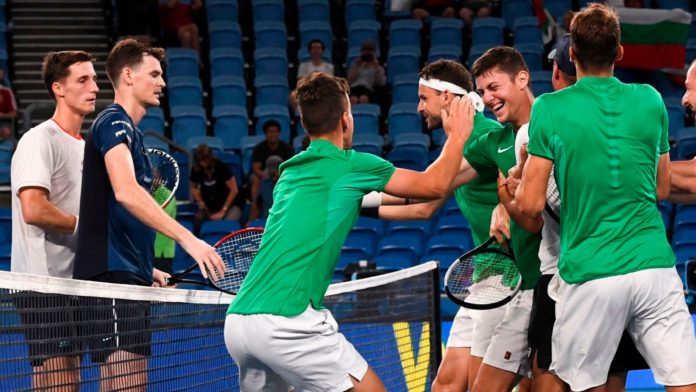 Great Britain made a losing start to their ATP Cup campaign in Group C after Jamie Murray and Joe Salisbury went down in the deciding doubles tie-break to Bulgarian duo Grigor Dimitrov and Alexandar Lazarov at nearly 3am local time.

World No 20 Dimitrov paired up with Lazarov for the first time together to defeat Jamie Murray and Salisbury 7-6 (7-5) 6-7 (2-7) 11-9 in the deciding doubles clash after the British duo had failed to agonisingly convert two match points.

Britain, captained by Tim Henman, were taking part in their maiden outing in the competition which sees them meet Bulgaria, Belgium and Moldova in the round-robin stage.

Across the course of 10 days, 24 nations are competing in Perth, Brisbane and Sydney. The six winners of each group, plus the two best second-placed finishers across the groups, will make-up the final eight.

On court at the Ken Rosewall Arena, Norrie started like a freight train against Kuzmanov and it took him just 44 minutes to secure the first set. He punished the Bulgarian’s 18 unforced errors and played confident tennis, however, the tables turned in the second set when his opponent cleaned up his own output.

Kuzmanov snatched the momentum back as he cut down on his mistakes and Norrie dropped off on serve. The Brit won just 33 per cent on points on his second serve and lost the set 6-3 in a little over half-an-hour.

After vital words from advice from Henman, and his fellow team-mates, Norrie refound his confidence at the beginning of the decider. Despite, a few smaller final-set undulations Norrie showed the maturity needed to in order to swing out and take the contest 6-2 3-6 6-2.

I just trusted my legs, overcame a little bit of adversity at the start of the second set when I lost a little concentration, and it’s unreal to get through it.

In the absence of Andy Murray, who has pulled out of the competition and the Australian Open due to injury, Britain’s top singles spot was taken by Evans, who faced Dimitrov.

Evans followed his team-mate’s suit by flying out of the blocks and confidently took the first set 6-2 at the Ken Rosewall Arena. As the second set played out, Dimitrov started to read to the variation coming back at him.

With this knowledge fuelling him, his level increased and his confidence and power surged. Evans did not have the accuracy to respond fully and instead lost 2-6 6-4 6-1 in two hours and 16 minutes.

Defeat for Jamie Murray and his doubles partner Salisbury now means Sunday’s clash against Belgium is a must-win in their hopes of making progress out of the group stage of the competition.

Canada secured the first match of the new competition with Denis Shapovalov and Felix Auger-Aliassime both winning their singles encounters against Stefanos Tsitsipas and Michail Pervolarakis of Greece before combining to win the doubles.

Belgium overcame the last team to qualify for this ATP Cup, Moldova and the USA’s clash with Norway went down to a deciding-doubles rubber.

After sharing a set apiece, Casper Ruud and Viktor Durasovic defeated Austin Krajicek and Rajeev Ram 10-5 in the deciding tie-break.

Australia’s Nick Kyrgios commenced the home team’s campaign against Germany with a 6-4 7-6 (7-4) victory in the singles.

Ahead of the tournament, he pledged to donate 200 Australia dollars for every ace that he served to help victims of the bushfires and he put down 20 during his clash with Jan-Lennard Struff.