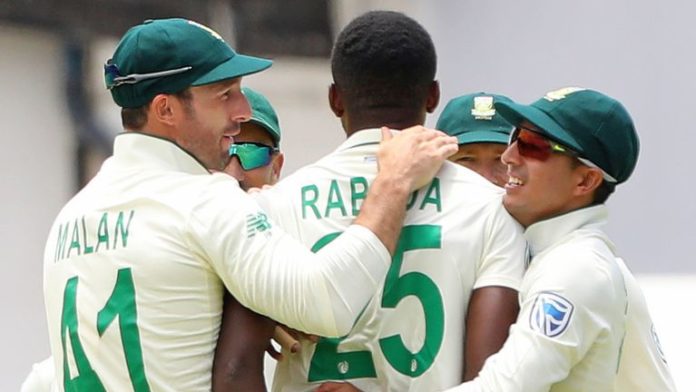 Watch day two of the second Test between South Africa and England, live on Sky Sports Cricket from 8am on Saturday

For 27 deliveries late on day one of the second Test between South Africa and England at Cape Town he looked imperious, striking four boundaries and lofting Keshav Maharaj for one glorious straight six as he took the game to the home side.

“This is the way he’s got to play,” said Sky Sports’ Nasser Hussain on commentary. “Not reckless and slog, but he’s got to put bat to ball.

“If you’re an opposition captain, and Buttler comes to the crease, you’re quite happy if Buttler’s trying to play like an old-fashioned blocker. He’s got to counter-attack.”

There was an air of inevitably about the beginning of his innings, that clarity of thought, the confident strokeplay and clean ball-striking, all reminiscent of the best of Buttler’s white-ball knocks.

A cricketer described so consistently as a ‘freak’ for his unique talents in coloured clothing, Buttler has all too often looked a mere mortal when wearing his Test whites. But, not on Thursday.

Buttler has rightly copped his fair share of criticisms for his modest Test record – just one hundred registered over his 38 Test caps, six total in his first-class career – but he has largely been given the benefit of the doubt.

Technical flaws were regularly exposed during his first run in the Test team but, since his reintegration in the 2018 summer, the widely held belief has been that Buttler hasn’t been helped by regularly having to bat with the tail as England’s top order continue to toil.

England have scored more than 400 just twice in their 42 Test innings since Buttler’s recall, showing the degree to which the team has struggled. On a personal level, Buttler started strong, scoring six fifties and his solitary Test ton in 2018, but he has hit only three more half-centuries since.

Buttler’s natural, aggressive game has been impeded, too often having to come in at the 185-5 mark (or worse) like he did here in Cape Town.

It could be argued such occasions provide the perfect scenario for a Buttler counter-attack, a la Adam Gilchrist and the Australia team he often bailed out in the early 2000s.

But, with England’s batting failing with such regularity, you feel Buttler has personally placed more responsibility on his shoulders as a senior figure in the dressing room – four of England’s batsmen in this Test combine for 19 caps, half of Buttler’s total. It would be careless for him to simply look to slog his way out of trouble.

As a result, Buttler’s approach has, at times, appeared confused while in the midst of the first-innings collapses, on the tricky wickets doing a bit and during the battling fourth-innings run-chases that require a bit more steely grit than expansive shot-making.

It’s rare that Buttler gets an opportunity to act on his ‘see ball, hit ball’ instincts. Well, on day one in Cape Town he saw an opportunity.

Buttler came out to the wicket in the 67th over, with England under-achieving on what most of the experts have considered to be a very good batting track – one that Ollie Pope (56no) and Ben Stokes (47) had certainly made look pretty benign in racing to a fifty stand after tea, arguably England’s best passage of the day.

Stokes looked set to turn the game, much like he had threatened to do in the fourth innings at Centurion but, similarly, he got out when just on the cusp of cutting loose, tamely chipping Anrich Nortje to cover. Buttler took on the mantle, and it looked to be the correct call, with the threat of the second new ball looming.

One man who’d know, Kevin Pietersen, said on commentary as Buttler sent the ball crashing to the boundary for the second time: “This is exactly what they’ve got to do for the next 11 overs, they’ve got to be clever in the way they score runs, but the intensity has to be there.

“Get as close to 250 as possible, get that confidence, and make sure that they’re in when Vernon Philander gets that new ball.”

Buttler listened to the first part, confidently blasting his way to 29 of his most convincing runs at Test level but, crucially, he could not complete the second part of the assignment, edging a tempting, teasing delivery from Dwaine Pretorius behind five overs shy of the 80-over mark, opening up an end which South Africa’s seamers took full advantage of with the new nut.

It will go down as another disappointing entry into the Buttler Test scrapbook, but arguably it was the greatest glimpse into what he is capable of.

After another explosive white-ball hundred – off just 50 balls – back in May, Hussain said of Buttler: “He is a freak. You travel the world and you talk to people about Jos Buttler, and they rave about this lad.

“I don’t like massive comments, but he’d have to be up there with the three or four greatest white-ball players of all time.

“Sometimes we don’t build up our own cricketers enough. This bloke is so special, it’s untrue.”

Kohli, De Villiers, Dhoni and Richards all converted their white-ball talents into the Test arena, with only Dhoni (38.09) not averaging above 50.

Buttler’s talent certainly deserves to see him hold such esteemed company, but it’s time the runs catch up. Hopefully, Thursday’s impressive but all too brief cameo was a sign of things to come.

Watch day two of the second Test between South Africa and England from 8am, Saturday on Sky Sports Cricket.