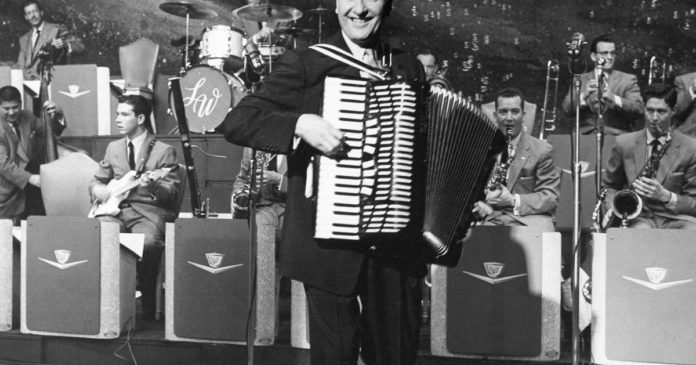 In 1971, after two decades on the air, ABC cancelled “The Lawrence Welk Show,” a musical variety series led by the German-accented bandleader and accordionist Lawrence Welk.

Welk had become famous for his “champagne music,” so-called because fans likened it to drinking champagne – light and bubbly.

Those bubbles were almost burst when Welk and his show were swept up in a series of mass cancellations that included series like “The Beverly Hillbillies,” “Green Acres” and “Petticoat Junction” – shows that were not deemed hip or catering to urban viewers.  However, Welk took his un-hip show into syndication, playing on for another decade, while attracting an even larger audience, as many as 30 million people a week. By the time his series ended its run in 1982, it was television’s longest-running musical variety show.

Welk was raised on a farm in Strasburg, North Dakota, the child of German immigrants who made their way to the United States by way of the Ukraine. His father sold a cow to pay for Welk’s first accordion. In exchange, Welk worked on the farm until he was 21, turning over any monies earned from gigs.

He would make a name for himself across the Upper Midwest leading a ten-piece band called the Hotsy-Totsy Boys, and in 1951 “The Lawrence Welk Show” began as a local program on KTLA in Los Angeles.

On this week’s episode of “Mobituaries,” “Sunday Morning” correspondent Mo Rocca sits down with former “Saturday Night Live” cast member and star of HBO’s “Los Espookys” Fred Armisen (who famously parodied Welk on “SNL”) to memorialize the accordionist, band leader and television host. They also discuss their own personal memories of the show, and how the man who seemed like the ultimate square was anything but.

On Welk’s longevity, Armisen asked, “Could it be seen as something a little bit like … what the Grateful Dead did? Just keep going? just keep going?”

You can stream or download the “Mobituaries” podcast “The Orphan Train” free at art19.com, or wherever you get your podcasts.