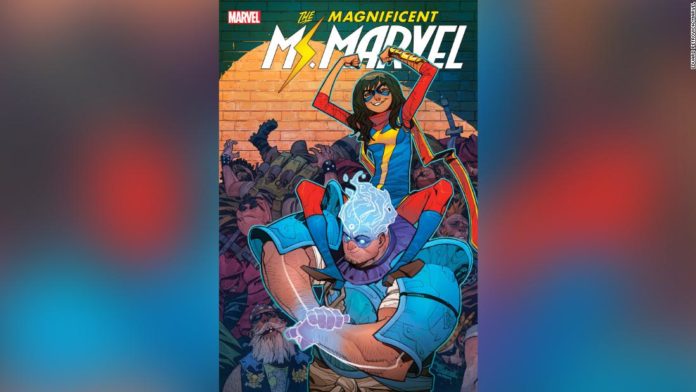 Fadi Fadlalah, aka the superhero Amulet, will appear in a new Ms. Marvel comic alongside Kamala Khan, a Pakistani American teen.
Khan took up Ms. Marvel’s mantle in 2013, becoming Marvel’s first Muslim superhero.
Jordanian-American illustrator Sara Alfageeh, who co-created Amulet with Marvel scribe and author Saladin Ahmed, said the two based his hero design on the nazar, a symbol thought to protect wearers from the evil eye — or the “harmful intentions of others.”
“We tend to associate sharp corners and edges with evil, and rounded designs and circles with good,” she said in a statement to Marvel. “This character is a gentle giant, so I wanted to make sure that even with his size he was shaped like a friend.”
Ahmed, a Detroit native and Arab-American who said he “basically learned to read from Marvel Comics,” is keeping most of the details about Amulet’s background a surprise. He did say, though, that Amulet’s got magical powers.
If the cover of the comic is any indication, Amulet is a hulking hero with fiery blue hair and an ally to the young Ms. Marvel. If their pairing proves successful, the duo could keep up the crime-fighting for years to come.
Amulet makes his official Marvel debut in March 2020.