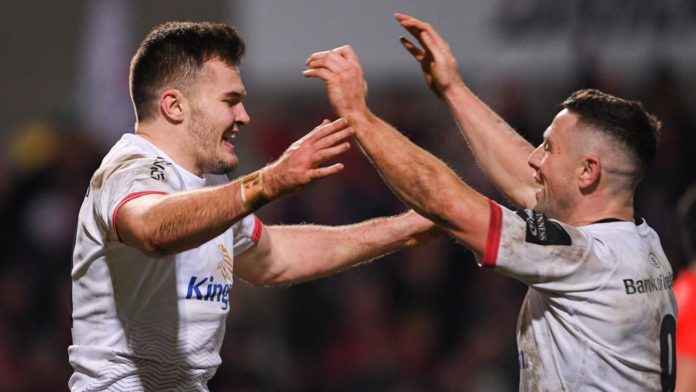 A recap of Friday night’s PRO14 action as Ulster thrashed Munster at home, and Scarlets squeezed a win at Cardiff Blues.

John Cooney was again the star as Ulster continued their good form with a resounding five-try 38-17 hammering of Irish rivals Munster at the Kingspan Stadium.

Now that is how you start a new decade ??

The scrum-half scored 18 points from a try, all five conversions and a penalty as Dan McFarland’s side ran up another bonus-point victory.

Munster managed tries from Shane Daly and Niall Scannell along with two conversions and a penalty from the boot of Joey Carbery.

Ulster had led 17-10 at half-time after coming from being 7-0 behind through tries from Cooney and Baloucoune which were converted by Cooney, who also kicked a penalty.

They went on to cross the Munster line three more times in the second half.

Cardiff Blues missed the chance to record a hat-trick of festive Welsh derby victories as Scarlets sneaked a 16-14 win before a sellout crowd at the Arms Park.

A strong performance from the visitors who fought off a spirited @cardiff_blues fightback ?

After wins over Ospreys and Dragons, Blues were narrow favourites for victory but poor goal-kicking cost them the match.

Leigh Halfpenny made them pay with three penalties and the conversion of a try from Gareth Davies.

Blues’ tries came from Owen Lane and Josh Adams, with Jarrod Evans and Jason Tovey each adding a conversion.