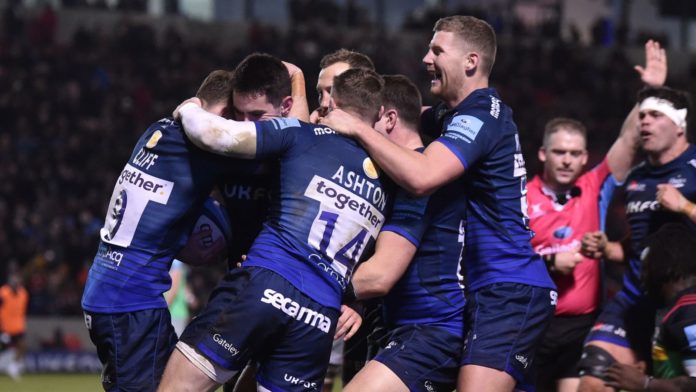 Sale moved up to third in the Gallagher Premiership table following a dominant 48-10 bonus-point win over Harlequins at the AJ Bell Stadium.

Steve Diamond’s men dominated much of the opening period and deservedly went into the break 24-10 in front thanks to tries from Akker Van Der Merwe and the James brothers, Sam and Luke.

Quins had opened the scoring through an early try from Gabriel Ibitoye, while Marcus Smith added a three-pointer later in the half, but they were unable to hit back after the interval.

The second period began as a much calmer affair, with Rob Du Preez’s penalty the only points in the third quarter, but Sale finished with a flourish as Rob Webber, Chris Ashton and Rohan Janse Van Rensburg touched down to complete a fine win.

Despite enduring an inconsistent start to the campaign, the Sharks were impressive in their previous home game and they began this encounter with similar intent.

The Du Preez twins, Dan and Jean-Luc, carried hard and they earned a couple of penalties in the opposition 22. They opted for the lineout both times and put Quins under significant duress, but a mistake from Janse Van Rensburg allowed the visitors to counter.

Smith brilliantly picked up a stray ball and kicked ahead. Ibitoye was then on hand to twice grubber through, collect and touch down for a superb individual effort.

Unperturbed, the hosts continued to control possession and territory and they were rewarded with a Rob Du Preez penalty before Sale scored their opening try.

Once again the South African contingent were influential as fly-half Du Preez’s pass inside found Van Der Merwe and the hooker displayed brilliant pace and strength to go over.

Sale were not finished there but this time it was a Quins error which led to Sam James eventually crossing the whitewash. Plenty of work still needed to be done when Bryn Evans found the centre but he and wing Byron McGuigan combined to extend their buffer.

The Londoners were being outplayed but, to their credit, they responded well and reduced the arrears via the boot of Smith.

They appeared to be heading into the break just seven points down but they needlessly infringed at a scrum and that allowed the Sharks one final attack. Full-back James duly took advantage as he stepped inside Vereniki Goneva, weaved outside two other would-be tacklers and touched down for a wonderful try.

It left Paul Gustard’s men with plenty of work to do in the second period but they struggled and that frustration led to a needless indiscretion from Joe Marler. The loosehead, who was red-carded at the AJ Bell Stadium two years ago, put a forearm into the head of Jean-Luc Du Preez.

Although it wasn’t done with much force, Marler was sin-binned – before promptly apologising to the wrong Du Preez twin – and Rob Du Preez kicked the resultant three-point opportunity.

Despite the one-man advantage, Sale failed to make the extra man count and instead had to wait until Quins had returned to a full complement to secure the bonus-point. It came from the back of their trusty maul as Webber went over to complete the full five.

Marland Yarde and Matt Symons were then sin-binned as a scuffle broke out following the try, but the hosts remained in the ascendancy and finished a fine evening when Ashton and Janse van Rensburg touched down.