Home Sport Wilson and Wentz: Doing it all 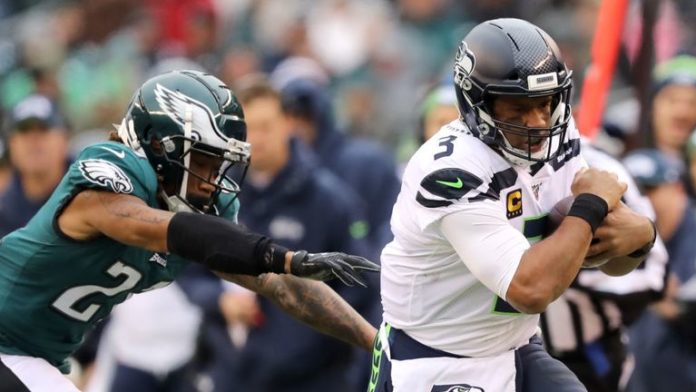 Watch Seahawks at Eagles on Sky Sports Action at 9.40pm on Sunday; Sunday’s coverage begins with Vikings at Saints at 5.30pm

On Sunday, Russell Wilson and Carson Wentz will meet in a matchup of two quarterbacks who do it all for their teams.

When the Seattle Seahawks visit Lincoln Financial Field to face the Philadelphia Eagles on Sunday, all eyes will be on the quarterbacks.

Through injuries and a lack of weapons around them, Wilson and Wentz have dragged their teams to the postseason on their backs.

Both team’s defenses rank in the middle or bottom of the pack in yards and points allowed this season. Both offenses, which have scored similarly across the year (Seahawks 25.3 points per game, Eagles 24.1) are devoid of big-name individual playmakers but manage to get the job done as a group.

Will Titans spoil the Patriots’ party?

The Titans and Patriots have been trending in opposite directions. Will Tennessee hand New England an early exit?

Whichever team makes it through to the next round will have battled through a ton of adversity to do it. Ultimately, the responsibility will lie with the men under center.

Wilson has been through it all

In Russell Wilson’s eight-year NFL career, his Seahawks have only missed out of the playoffs once. His playoff experience (13 games) is vast, and he has managed eight wins, 24 total touchdowns, two Super Bowl appearances and one Lombardi Trophy win.

He has experienced the highs and lows of playoff football in eight different stadiums and been through overtime wins and last-second, heartbreaking losses.

Will Wilson’s past be a factor this weekend? History suggests it may well be.

It starts with the East coast travel. Since the start of the 2018 season, Wilson is 7-0 in the Eastern time zone – with a 72.2 completion percentage, a 15-1 touchdown-to-interception ratio and a 128.0 passer rating. The travel should not be a factor in this one.

Wilson’s record against the Eagles also bodes well for Seattle. He is a perfect 4-0 against Philadelphia and 3-0 vs Wentz. In Week 12 this season, Wilson and company rolled into Philly and topped the Eagles 17-9.

In his head-to-head games with Wentz, Wilson has five touchdowns to one pick and a 98.8 passer rating, while Wentz trails with a four touchdowns, five picks and a rating of 74.4. Time after time, Wilson has managed to get the better of the Eagles defense with his elusive scrambling and improvisational ability.

But can he do it again, against an Eagles team that for the most part, has been excellent at home under head coach Doug Pederson? Since 2016, they have given up the fewest points per game (16.1) in the entire NFL and have the second best record (25-9) to the Patriots.

What we do know is that Wilson will keep his team in the game for all 60 minutes. Last week, in the team’s thriller against the 49ers, he battled back from 13-0 down at half-time, 19-7 in the third quarter and 26-14 with four minutes left to put Seattle in the position to seal the NFC West and a home playoff game.

49ers linebacker Dre Greenlaw made the tackle at the goal line, and Seattle fell inches short of sending San Francisco to the East coast instead. With a potential rematch with their NFC West rivals awaiting in the next round, can Wilson drag his team over the finish line this time?

Wilson will need to use all his experience to win, but he will be facing a quarterback with none of it.

The last-second stand against Atlanta. The flea-flicker to Torrey Smith. The ‘Philly Special’. The double-doink in Chicago. Carson Wentz is in his fourth season with the Eagles, but through all the special playoff moments, he has been in his street clothes.

Ahead of Philadelphia’s 2017 Super Bowl run, he tore his ACL and watched Nick Foles lead the team to the promised land. Last season, it was a back injury that kept him out as the Eagles fell agonisingly short of another fairy tale playoff win – losing 20-14 in New Orleans after a surprise road win over the Bears.

Marcus Williams owns an unwanted place in NFL history, but he and the New Orleans Saints can put that right on Sunday.

What the 27-year-old has done this season – although he doesn’t receive the plaudits like Lamar Jackson, Drew Brees, Patrick Mahomes and Wilson – has been supremely impressive.

.@cj_wentz has been on fire in the red zone this season:

Wentz became the first Eagles player ever to reach 4,000 passing yards in a season – and he did it without any of his outside receivers reaching 500 yards on the season. At this point, he is without his top three wideouts (Alshon Jeffery, DeSean Jackson and Nelson Agholor).

It is so extreme that Eagles’ active wide receivers have fewer combined receiving yards this season (840) than Seahawks’ leading receiver Tyler Lockett (1,057).

Last week in the division-clinching win over the Giants, the Eagles’ leaders in receiving yards were practice squad/third-string running back Boston Scott, backup tight end Dallas Goedert and tight end/wide receiver hybrid Joshua Perkins, who was only promoted to the active roster at the end of November.

On the outside, they started Greg Ward Jr, Robert Davis and Deontay Burnett… Who? You’d be forgiven for not knowing anything about the trio, since all three only joined the team’s full roster in the last six weeks!

Undrafted Ward has already been cut by the Eagles two times this season and last year, played in the Alliance of American Football. Davis was a 2017 sixth-round pick by the Redskins and had one career catch before joining on December 12 (he now has two). Finally Burnett, who made the roster on Christmas Eve, has already been waived four times by three teams in his short career (undrafted in 2018).

On Sunday, Wentz will also be without Pro Bowl right guard Brandon Brooks and possibly right tackle Lane Johnson, still struggling with an ankle injury. Once again, he will be tasked with elevating ‘guys off the street’ into winners.

Watch Wilson and Wentz go head to head as the Seahawks face the Eagles live on Sky Sports Action at 9.40pm on Sunday; coverage begins with Vikings at Saints from 5.30pm.

The NFL playoffs get underway on Saturday at 9pm on Sky Sports Action with the Bills at Texans followed by Titans at Patriots.