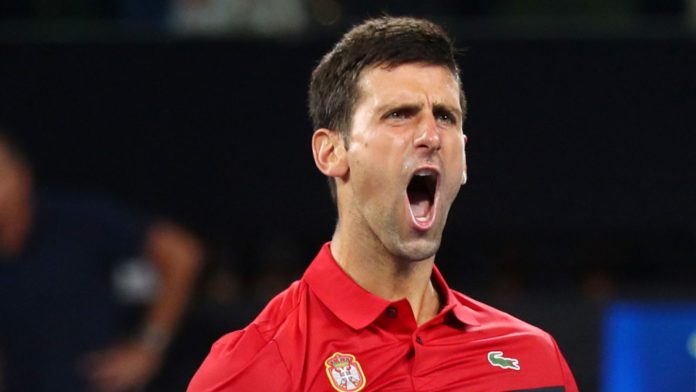 Novak Djokovic and Rafael Nadal both hit the right notes to help Serbia and Spain record maiden victories in the ATP Cup competition in Australia.

The world-leading players each secured straight-sets victories in their respective singles matches whilst Dominic Thiem found himself ousted by an inspired Borna Coric.

The new 24-team men’s tournament started Friday in Sydney, Brisbane and Perth and will conclude with a final in Sydney on January 12, leaving players time to fine-tune for the Australian Open in Melbourne.

Great Britain made a losing start to their ATP Cup campaign in Group C after Jamie Murray and Joe Salisbury went down to Bulgaria at nearly 3am local time.

In Brisbane, Djokovic had to dig deep during his first competitive match of 2020 in order to fend-off Kevin Anderson and secure Serbia’s tie against South Africa.

The winner of a record seven Australian Open titles was able to feed off the crowd at Pat Rafter Arena in order to come through two intense tie-breaks and win 7-6 (7-5) 7-6 (8-6).

Djokovic raced 4-1 up in the first set before Anderson found his feet and took it the distance. With the South African in his groove, the second set stayed with serve throughout.

In the tie break, Anderson had a chance to serve for the set at 6-5 but he netted a forehand. Djokovic then finished him off with a curling forehand winner to set up match point and nailed a match-winning volley.

The world No 1 Rafael Nadal had an easier time of it when it came to clinching Spain‘s win over Georgia in Group B.

Nadal, who clinched year-end No 1 spot for the fifth time last year, came through in one hour and 50 minutes to secure the 6-3 7-5 result against Nikoloz Basilashvili.

It was his fourth straight win over the 27-year-old Georgian and built upon Roberto Bautista Agut’s 6-0 6-0 result against Aleksandre Metreveli to produce an unassailable 2-0 lead in the tie ahead of the doubles.

In contrast to Nadal and Djokovic, the world No 4 Thiem did not have a great start to his preparation for the Australian Open as he fell 7-6 (7-4) 2-6 6-3 to Borna Coric of Croatia.

Gael Monfils secured France‘s first win in Group A in Brisbane. He rallied from a break down in the second set and saved three break points as he served for the match in a 6-3 7-5 win over Cristian Garin.

Benoite Paire opened the tie against Chile with a 6-7 (7-3) 6-3 6-3 victory before Monfils clinched the best-of-three match encounter ahead of the doubles.

Jarry and Nicolas Garin combined to win doubles for Chile.

Japan also commenced their campaign in a positive fashion with cleansweep against Uruguay in Perth.

In Group E, Argentina needed a deciding-doubles victory in order to edge out Poland 2-1.

Guido Pella handed Argentina a lead with a 6-2 2-6 6-2 win over Kamil Majchrzak before Hubert Hurkacz levelled for Poland.