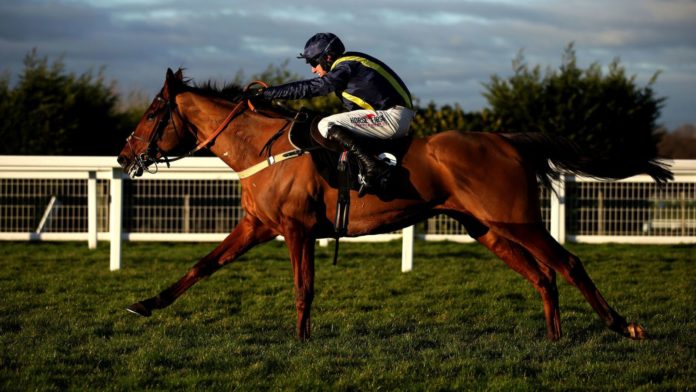 The Dorset handler saddled Finian’s Oscar to claim the Grade One prize in 2017, and Elixir De Nutz made every yard of the running 12 months ago.

After making it third time lucky over hurdles with an impressive course-and-distance success last month, Fiddlerontheroof was the 5-4 favourite to add his name to the roll of honour – and he did so in some style in the hands of Robbie Power.

Cheltenham winner Hang In There set out to make all the running, but he was a spent force early in the home straight – at which stage Fiddlerontheroof was sent about his business.

Gavin Cromwell’s Irish raider Jeremys Flame went in pursuit, but Tizzard’s charge never looked in any real danger of being caught and passed the post with six lengths in hand.

“He is a big, scopey horse who is improving as the season has gone one. He will certainly jump a fence in the future,” said Tizzard’s son and assistant Joe.

Before his first Sandown success, Fiddlerontheroof had chased home the high-class Thyme Hill in the Persian War at Chepstow, and was also touched off by the very promising Edwardstone on a sounder surface at Wincanton.

Connections went to £200,000 to secure his services last April after some promising bumper performances in Ireland for John Joe Walsh.

“He had some very good bumper form, and we saw him at the Aintree sale,” added Tizzard.

“We loved his model and the physical side of him, hence we bought him.

“It wasn’t that soft when he ran a really good race at Chepstow first time out – and with a bit of hindsight, he possibly could have really shaken Thyme Hill up. That is the best novice hurdle form in Britain at the moment.

“I think he is physically capable of handling this soft ground, which makes a difference around Sandown, but he has already proved he can go on good ground as well.”

The father-and-son team will have to decide whether to stick to two miles in the Supreme Novices’ Hurdle at the Cheltenham Festival, or step Fiddlerontheroof up in distance for the longer Ballymore Novices’ Hurdle.

They have plenty of strength in depth in the novice division, while the prevailing conditions at Prestbury Park in March are also likely to be a key factor.

Tizzard said: “We’re not sure ourselves about the trip. He will probably have an entry in the Supreme and the Ballymore, and we will have a sit down with Robbie nearer the time and see what is happening ground-wise and make a decision of the back of that.

“You need to stay to win a Supreme – and he hasn’t looked outpaced in any of his races, because he travels well, so we’ll see.

“It is certainly the best team of novice hurdlers we’ve had. In an ideal world, you wouldn’t like those three (Fiddlerontheroof, The Big Breakaway and Master Debonair) to clash, but it might have to happen. That is something we’ll worry about in February.

“If we can get all three to Cheltenham in one piece and in the form we are in it will be a good problem to have.”

Cromwell was delighted, meanwhile, with the performance of Jeremys Flame – who is likely to go back against her own sex at Cheltenham.

“She ran a cracker,” said the County Meath trainer.

“She’s done everything right, and the best horse won on the day.

“You have to be pleased with that, because she is a lovely mare going forward. She is improving with every run, and that is down to her learning to deal with everything.

Son Of Camas was a long way back in third.