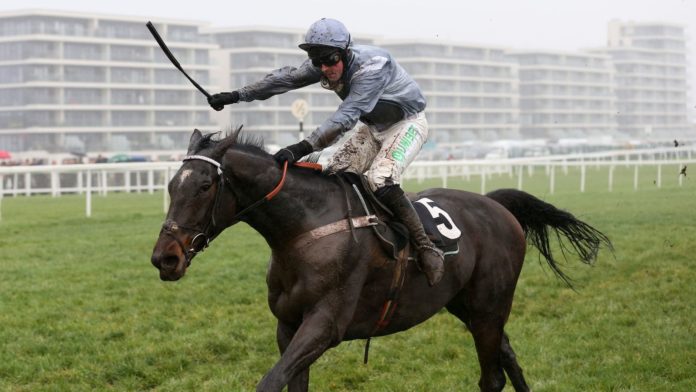 Nicky Henderson believes Santini may be the forgotten horse in this season’s staying-chase division, as he prepares for a likely return to action at Cheltenham this month.

The eight-year-old was narrowly denied in a thrilling three-way tussle for the RSA Insurance Novices’ Chase at last year’s Cheltenham Festival, finishing just behind the currently sidelined Topofthegame and just ahead of last weekend’s Savills Chase hero Delta Work.

Santini made a successful but unimpressive start to his campaign in the Future Stars Intermediate Chase at Sandown in early November.

However, Henderson was pleased with how his charge performed on the Seven Barrows gallops on Saturday morning – and hopes he can cement his Cheltenham Gold Cup claims in the the Cotswold Chase on January 25.

Henderson said: “Santini has been slightly forgotten, but (jockey) Nico (de Boinville) rode him this morning – and he was mad fresh.

“The Cotswold Chase is where I’d like to go – that’s the plan. He ran here (Sandown), and then we were playing with his foot again – but his work was good this morning, and he is doing plenty.

“He was fresh, coming home. You wouldn’t know he had a gallop, for sure.”

Santini is a best priced 10-1 for the Magners Cheltenham Gold Cup, with last year’s winner Al Boum Photo heading the market at 5-1.

Henderson also provided a positive update on Altior, who could bid to bounce back at Kempton next weekend after his first defeat in 20 starts over jumps.

The dual Queen Mother Champion Chase winner missed an intended appearance in the Desert Orchid Chase over the festive period, but is set to return this month – potentially in the Grade Two Silviniaco Conti Chase next Saturday.

Henderson added: “We will see how we go on Sunday, and then make a decision. Nico said he felt great this morning.

“If Kempton was a lot softer than it was the other day we have to have a rethink, but what are the chances of Ascot being any better the following week? It’s been horrible ground there.

“I would be keen to go to Kempton if all goes well.”

Henderson also confirmed Champ is faring well following his heavy fall in the Dipper Novices’ Chase at Cheltenham on New Year’s Day, but dual Champion Hurdle hero Buveur D’Air and Angels Breath will both remain sidelined for the remainder of the campaign.

Henderson’s staff have been busy aiding Champ’s recovery – including an extra shopping trip to the frozen-pea counter for the trainer’s wife Sophie to bring back some home-spun medication for the eight-year-old.

He said: “Champ had a saddle on him this morning and was good. He was sore a couple of hours after the race, and the vets got on top of it. They did an X-ray, but there was nothing there.

“Sophie went into the village, and there was a run on frozen peas in the Co-op. We sowed on a little sack – you can’t put them against the skin, because they will burn. Every time they thawed out, we put some more on.

“Angels Breath is back home, which is good. He won’t be racing this year but has been allowed home.

“Buveur D’Air won’t be racing this year – we have just got to concentrate on getting him back.”