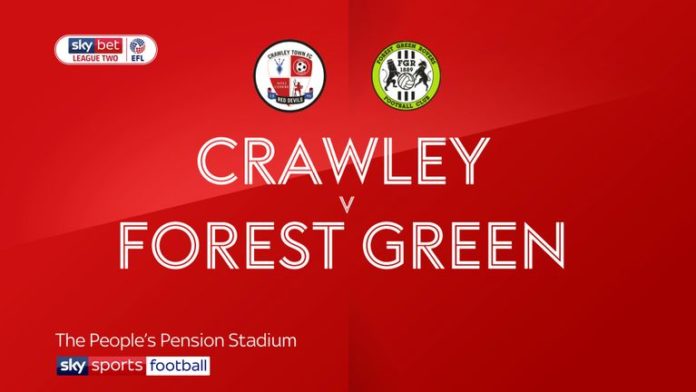 A second half own goal by Jordan Tunnicliffe gave Forest Green a deserved Sky Bet League Two point after Mark Cooper’s men gifted Crawley the lead in a 1-1 draw at the Broadfield Stadium.

Rovers, who have now won only one of their last eight league games, dominated for long periods after the break but once again it was their finishing that let them down.

Rovers had failed to score in six of their previous nine league games and attacking midfielder Javani Brown, signed on loan from Colchester until the end of the season and drafted straight into the side, provided impetus early on.

Brown had a close range shot held by goalkeeper Glenn Morris before Morris smothered his ball into the area as he attempted to set up Aaron Collins.

Striker Ashley Nadesan should have hit the target at the other end when he shot wide after Ollie Palmer`s knock down at the far post.

Crawley broke the deadlock on the stroke of half-time when a defensive lapse by Liam Kitching allowed Bez Lubala to score his eleventh goal of the season from close range after Nadesan played the ball in.

Brown threaten to reply shortly after the interval but his shot from just outside the area was saved by alert keeper Glenn Morris.

But Rovers drew level just after the hour when defender Tunnicliffe headed into his own goal following a cross by Nathan McGinley.