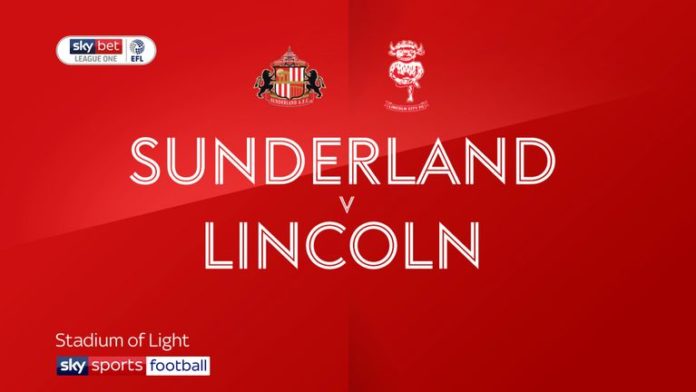 Sunderland claimed their first home win since the start of November as three first-half goals secured a 3-1 victory over Lincoln in Sky Bet League One.

Phil Parkinson’s side dominated from the off at the Stadium of Light and took a deserved lead in the 19th minute, with Tom Flanagan rising highest inside the six-yard box to head home Chris Maguire’s corner.

Maguire troubled the Lincoln defence all afternoon and the Sunderland forward was heavily involved in his side’s second goal four minutes later.

He closed down Lincoln goalkeeper Josh Vickers, who misguidedly attempted to play a square ball out of his own six-yard box. His attempted pass cannoned off Maguire, and Lynden Gooch outjumped Michael Bostwick to head home from close range.

Gooch was also responsible for Sunderland’s third goal shortly before the half-hour mark, racing on to Jon McLaughlin’s long clearance over the Lincoln defence before calmly slotting a low finish into the bottom right-hand corner.

The visitors failed to record a single effort on goal in the opening hour, but clawed a goal back midway through the second half.

Harry Anderson outmuscled Denver Hume in the area and drilled in a low shot that Tyler Walker turned home from close range.