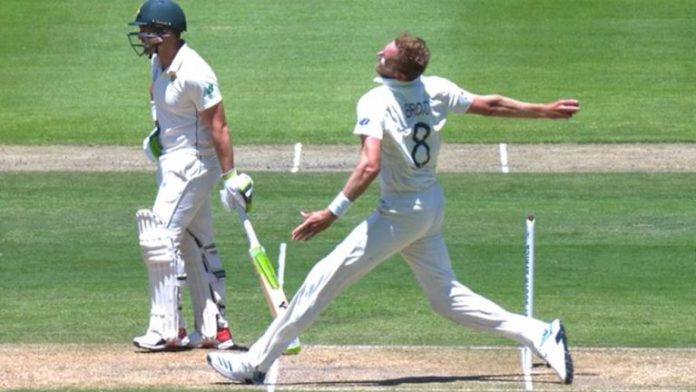 Mark Ramprakash: “What is going on? We spend millions of pounds on hosting international, elite cricket matches and we can’t judge whether a bowler is going over the line or not”

England enjoyed undoubtedly the best day of their tortured tour of South Africa, reducing their hosts to 215-8 in day two of the second Test at Cape Town.

A determined, and equally skilful bowling effort sees England hold a 54-run lead overnight, but it could have been even better and, certainly at tea after a wicketless afternoon session, the tourists will have been concerned that the key moments of the match weren’t falling their way.

Specifically, the key moment in the 28th over – South Africa 86-3 – which saw Stuart Broad take Rassie van der Dussen’s outside edge with a snorter of a delivery, leaping off a length that claimed his outside edge through to Jos Buttler.

It would be Broad’s third wicket in nine knee-pumping overs reminiscent of his best spells in an England shirt; Van der Dussen out for 16. But the jubilant celebrations were swiftly cut short.

No ball. Broad had overstepped.

Doubly painful for England, Dean Elgar (88) and the reprieved van der Dussen then kicked on to register a century stand for the fourth wicket by tea.

Broad had overstepped the ball before, too. In fact, according to former South African bowler and commentator, Shaun Pollock, the offending delivery was one of as many as “12 balls in that [afternoon] session that weren’t called”.

“It’s shocking,” the opinion of Mark Ramprakash in the Sky Sports studio. “It absolutely mystifies me.

“What is going on? We spend millions of pounds on hosting international, elite cricket matches and we can’t judge whether a bowler is going over the line or not.

“It’s a ridiculous situation. I really don’t know what the umpires are looking at?”

The issue has raised its head before, too. It seems that with increasing regularity, every half dozen or so Tests a sudden spate of no-balls are highlighted as having gone undetected, bringing about the usual questions.

Why can’t an automated buzzer be used to signal a no-ball? Why can’t it be the third umpire’s job to check?

Why can’t the umpire let the bowler know they are at least getting close to the line? In Broad’s case, if notified, his offending delivery the ball before might have afforded him the chance for the wicket ball to have been legal.

Nasser Hussain sympathised, adding: “Broad’s at fault, absolutely. But if an umpire’s not calling it – the ball before the Broad wicket was a no-ball – you must surely think you’re ok?”

However, Hussain also believes the modern-day bowlers don’t help themselves in their preparation not mirroring match conditions.

“I was out here [during practice] this morning and I saw Sam Curran bowling at some cones to get his length right – and he was bowling a yard over that front line.

“Not only is that bad training of the brain, in terms of where to take off, where to land, but it’s also bad training for the game and for his length – if, in the match, he moves back, then his length moves back. Everything gets affected.”

Fortunately for Curran, his lengths were spot on in the final session of the day, claiming the key wicket of Quinton de Kock (20) and finally dismissing van der Dussen (68), who was also earlier dropped on 43 by Ben Stokes.

Stokes more than made amends, registering four spectacular catches from second slip for the day, while South Africa collapsed late on, losing four for 24 in the final hour of play.

Curran, adding to the no-ball debate, talked of his ‘frustration’ with the umpires, telling Sky Sports: “As a bowler, it is quite frustrating; when you’re creeping over the line, you want to be told.

“I know in the IPL, they’re going to trial a third umpire who just watches for no-balls all game.

“It’s annoying as a bowler, but also we shouldn’t be bowling them.”

And is he guilty of bowling no-balls in the nets? “I hope not. But I’m not going to answer that,” he added with a smile. “Touch wood we get better at it, because it’s something we shouldn’t be doing.”

Broad’s no-ball could have signalled the beginning of the end for England in the series. Instead, their battling efforts late in the day have earned them a second chance.

Watch day three of the second Test between South Africa and England from 8am, Sunday on Sky Sports Cricket.