Home Culture The Golden Globe Awards dinner will be entirely plant-based due to climate... 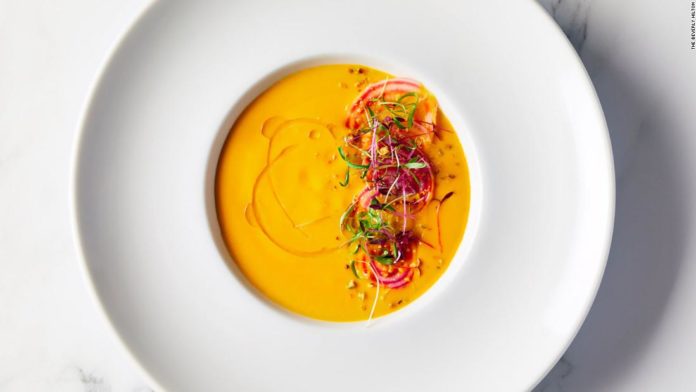 The feast will be plant-based, a decision made by the Hollywood Foreign Press Association out of concern for global warming. The group is the nonprofit organization that gives out the Globes to movie and TV luminaries.
“The climate crisis is impossible to ignore and after speaking with our peers, and friends in the community, we felt challenged to do better,” said Lorenzo Soria, president of the organization, in a statement to CNN. “The decision to serve an entirely plant-based meal was embraced by our partners at the Beverly Hilton, and represents a small step in response to a big problem.”
The Beverly Hilton has played host to the Golden Globes 49 times and for the last 45 consecutive years.
“Our talented culinary team is excited to create dynamic plant-based offerings for Hollywood’s best of the best,” said Matthew Morgan, The Beverly Hilton’s Executive Chef, in a statement to CNN.
Though meat has been taken off the menu, executive chefs Matthew Morgan and Thomas Henzi will not be making any compromises on luxury.
Guests will be served a vibrant chilled golden beet soup topped with shaved candy-striped beets and pistachios.
For the main course, mushrooms are taking center stage, featured in King Oyster mushroom “scallops” and wild mushroom risotto.
In a final flourish, a vegan opera dome dessert will provide a sweet ending.
A team of 11 chefs, 120 culinary staff, 50 bartenders, 160 stewards and 250 servers will try to ensure the night’s meal and each of the hotel’s five after-parties go off without a catch.
Soria said in a statement that, in addition to making veggies the star of the pre-show dinner, the show has also taken steps to eliminate single-use plastic and water bottles.
“We’re hoping to raise awareness around small changes that can have a greater impact,” he said. “We know awards shows have a long way to go, and we all can do better.”