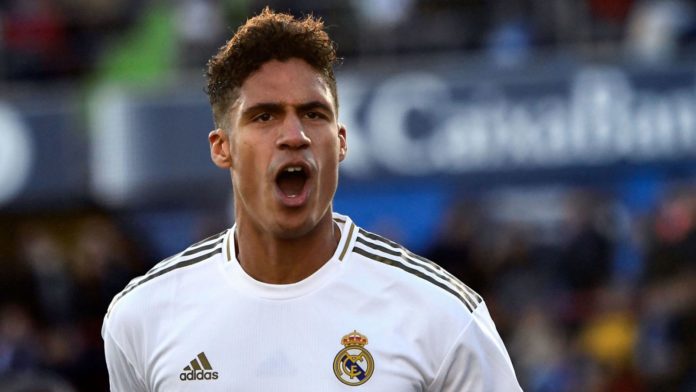 Raphael Varane had a hand in two goals as Real Madrid won 3-0 at neighbours Getafe on their return to La Liga action after the winter break.

The France defender provided the aerial challenge which led to David Soria’s own goal and then headed in the second shortly after half-time.

Thibaut Courtois was forced to make a string of fine saves for Madrid before the visitors added a late third from Luka Modric.

The win extended Madrid’s unbeaten streak to 10 league matches and turned the heat up on title rivals Barcelona, who face a derby against Espanyol later on Saturday.

Madrid, without the suspended Sergio Ramos, started on the front foot with Karim Benzema having a header saved, but they were soon relying on Courtois to keep them level.

The goalkeeper produced a stunning save to parry out Mauro Arambarri’s explosive volley from the edge of the area in the 24th minute.

Ten minutes later, and following a brief delay due to a failure with the referee’s equipment, Madrid were ahead.

Goalkeeper Soria, under pressure from Varane, failed to punch Ferland Mendy’s cross clear as the ball ricochet off his arm and into the empty net.

Getafe made a lightning start to the second half as Angel Rodriguez fired over and Jaime Mata was denied by a sprawling Courtois, although both were flagged offside.

But Madrid made it 2-0 after 53 minutes when the unmarked Varane headed in Toni Kroos’ free-kick, with VAR confirming the Frenchman had stayed onside.

Gareth Bale had a glorious chance to put the game to bed, chipping an effort straight at Soria after he was played in.

But Real added a third in added time when Modric converted from Federico Valverde’s pass, condemning Getafe to only their second home league defeat this term.

Elsewhere, Atletico Madrid moved up to third with a 2-1 win at home to Levante, while Valencia are sixth after a 1-0 victory over 10-man Eibar.