Home Sport How long left for Broad and Anderson? 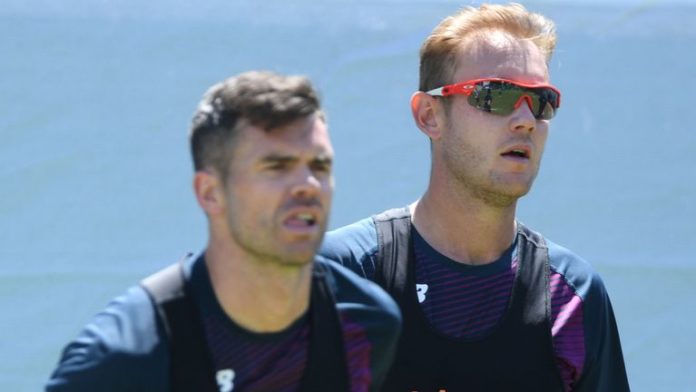 Dom Bess, Sam Curran and a series of missed no-balls are discussed by Graham Gooch and Ebony Rainford-Brent

James Anderson and Stuart Broad helped England battle back into the second Test against South Africa with five wickets between them – but how long do they have left at Test level?

Seamers Anderson and Broad – who have bagged a combined 1,058 Test wickets – will be 39 and 35 respectively come the start of the next Ashes series in Australia in 2021-22, so will they make it that far?

“In the Ashes in two years’ time, are they going to be around opening the bowling and taking the new Kookaburra ball for you? There has to be a question mark about that.

“I am not looking to get rid of them now, they are worth their place, are still brilliant bowlers and are still contributing. The younger bowlers can also learn off them.

“But by the end of the 2020 English summer, I think [head coach] Chris Silverwood and his management team have to have an idea of who we are going to go forward with.

“Jimmy is England’s best-ever fast bowler but, and I’m not doing him down, at 39, is he going to be bowling like he did [in Cape Town]? It’s difficult to say.”

“I would have hoped Jofra Archer would be fit for this Test as I wanted to see what Silverwood and Joe Root would have done.

“England have four Test series against average sides, if we are honest – South Africa, Sri Lanka, West Indies and Pakistan. Sides England should be able to beat. I would hope by the end of Sri Lanka series and the start of our English summer, we see ruthless decisions.

“An example would be that even if Anderson or Broad are playing that you might want to give the ball to Archer as you see him opening the bowling in Australia.

“Jimmy was the most miserly bowler in Australia last time, so even with the Kookaburra ball not swinging for him, with the hunger that he has I would back him to potentially be around – but the new ball has to go to pace.”

Anderson and Broad were backed up superbly by Dom Bess on day two at Newlands, with the recalled off-spinner shipping just 62 runs from his 27 overs and also dismissing South Africa opener Dean Elgar for 88 as the Proteas closed on 215-8 to trail England by 54 runs.

“He looks a good choice. The issue for him is getting more first-class cricket so he can improve. He has proved he is worth going forward with as he did a perfect job.”

Rainford-Brent added of Bess: “How he got the wicket of Elgar was through accuracy and control. To handle the pressure, keep calm and apply pressure against South Africa’s best batsman throughout the day shows to me that this is a young guy who knows about his game and has matured.

“I wouldn’t have expected him to perform so well so now that he has what do we do with him going forward as he is behind Leach at Somerset? He is going to need to be bowling as much as possible and needs to be a front-line spinner somewhere.”

Also on the Cricket Debate, Graham and Ebony discussed…

– How difficult the Newlands surface is to bat on

Watch day three of the second Test between South Africa and England, in Cape Town, live on Sky Sports Cricket from 8am on Sunday.