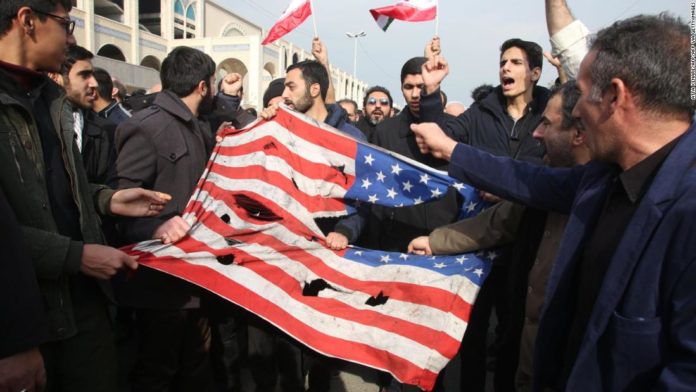 “This was a horrible, one-sided deal that should have never, ever been made,” Trump said as he withdrew from the deal. “It didn’t bring calm, it didn’t bring peace, and it never will.”
The other parties to the deal — China, Russia, the Europeans and Iran — disagreed and stayed the course. But the reimposition of draconian sanctions by the US, sanctions that had been largely lifted as Iran’s reward for signing up to the deal, gnawed away at its credibility.
As tensions grew, the agreement known as the JCPOA began to fray at the edges.
The Trump administration’s policy of “maximum pressure” against Iran, which began after that May statement, included crippling sanctions against its financial and oil sectors. President Hassan Rouhani said last week that the US “economic war” against Iran had cost the country $200 billion. Iran has lost nearly 90% of its oil exports, a key source of revenue; the value of the rial has plummeted, and the banking sector is under stress. Even though the sanctions exempted essential supplies, widespread shortages of food, medicine and medicinal goods have been reported throughout Iran.
Tehran responded to the US measures with what it called “strategic patience” — while nagging the Europeans to make up for the effect of US sanctions.
President Emmanuel Macron of France tried to smooth the waters, proposing a $15 billion credit line for Iran in return for its full adherence to the JCPOA. He also welcomed Iranian Foreign Minister Mohammad Javad Zarif to the G7 meeting in August and tried to engineer a meeting between Trump and Iranian President Hassan Rouhani at the UN General assembly.
But the dynamics were moving in the opposite direction. As the noose tightened on Iran’s oil exports, it retaliated on several fronts: attacks on oil tankers in the Gulf (by its own or proxy forces), a growing drumbeat of rocket attacks against US forces in Iraq, and most spectacularly the cruise missile attacks against Saudi oil plants in September.
The message was simple — if we can’t sell our oil and gain the proceeds, we will try to ensure others can’t either.
At the same time, Iran chipped away at the JCPOA. Beginning in July last year, it withdrew every two months from some part of the agreement. It exceeded agreed limits to its stockpile of low-enriched uranium, and then began enriching uranium.
Essentially, Iran was responding to America’s ‘maximum pressure’ with ‘maximum resistance’ — but short of open war. The two adversaries seemed set on a “no-peace, no-war” course of attrition.
That remains the case after Soleimani’s killing, for all the anger and cries for revenge emanating from Tehran. The Iranians and their proxies will probably seek out targets of opportunity around the world. But — as the Iranian leadership has already stressed — they will bide their time.
At the same time, the prognosis for the JCPOA looks poor. At best it’s in intensive care; at worst it may struggle to survive the year.
There’s been an almost helpless tone to European calls for restraint in the aftermath of the US drone strikes. France pleaded for Iran to “quickly return to full compliance with its nuclear obligations and to refrain from further action to the contrary.”
On Saturday, France, Germany and China called on Iran to preserve the deal and to avoid any measure that would violate it, according to a statement from French Foreign Minister Jean-Yves Le Drian. Le Drian spoke to Germany’s Heiko Maas and China’s Wang Yi in separate phone calls.
There is scant chance of Iran listening in the current environment. The Europeans are nowhere near making up for the cost and dislocation caused by US sanctions, the $15 billion line of credit has gone nowhere and the Iranian economy is deep in recession. Further and deeper withdrawals from the JCPOA are likely in the months to come.
But that doesn’t mean Iran will abandon the deal altogether and race towards developing a nuclear weapon. Eric Brewer and Ariane Tabatabai have written in War on the Rocks that Iranian policy is “designed to gradually build pressure on the United States and Europe by targeting key pillars of the agreement, rather than racing for a short-notice breakout capability.”
There is still plenty of strategic patience in Tehran. In light of the country’s deepening economic crisis and the sporadic flare-up of popular protests, the leadership may decide that upping the ante against the US is unaffordable, and full-scale war unsustainable.
By comparison, threatening to abandon the nuclear restraints so painstakingly negotiated by the Obama administration is almost risk and cost-free.