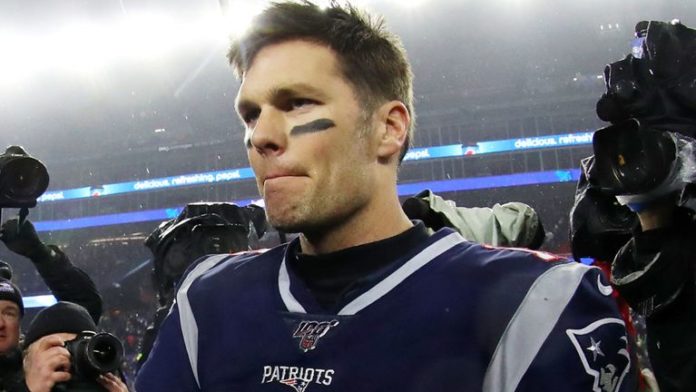 Tom Brady said he is “pretty unlikely” to retire after the New England Patriots’ season ended with a 20-13 loss to the Tennessee Titans on Saturday night.

Brady, who turns 43 in August, has spent all 20 seasons of his NFL career with the Patriots but will now become a free agent for the first time as his contract prohibits New England from placing their franchise tag on him.

The six-time Super Bowl winner was less certain about whether he plans to re-sign with the Patriots.

Against the Titans, Brady completed 20 of 37 passes for 209 yards with no touchdowns, throwing a game-clinching interception that was returned for a touchdown.

That left him with a lower quarterback rating than Ryan Tannehill, who threw for a total of 72 yards in his first career playoff appearance.

It was the earliest postseason exit for Brady and the Patriots since a 33-14 wild-card loss to the Baltimore Ravens on January 10, 2010.

“I think we’re all running out of time and chances, every year that goes by,” said Brady, who was without a touchdown in the playoffs for just the fourth time since 2001. “I don’t think I’m the only one in that category.”

Brady has previously stated he would like to play until he is 45 but he is coming off perhaps the worst (non-injury) season of his career as the Patriots struggled to put receiving weapons around him.

The Patriots have missed tight end Rob Gronkowski, who surprisingly retired last March at the age of 29.

Both Antonio Brown and Josh Gordon were released during the season for off-the-field reasons.

The team traded a second-round pick to the Atlanta Falcons to acquire wide receiver Mohamed Sanu in the middle of the season but he struggled to make an impact. He had one catch for 11 yards against Tennessee.

New England selected wide receiver N’Keal Harry in the first round of the 2019 NFL draft but his transition to the NFL has been slow after missing the first nine weeks of the season through injury.

Patriots offensive coordinator Josh McDaniels, a close confidant of Brady, has been linked with a number of head-coaching jobs and could also leave.

Despite New England’s recent struggles on offence, Brady remains as popular as ever with Patriots fans. Familiar chants of “Brady! Brady! Brady!” could be heard at Foxborough on Saturday night and others brought signs in support of him, with one reading “Don’t leave Tommy”.

Asked if he had a message for Patriots fans, Brady replied: “I personally appreciate everything they’ve contributed – not just this year, but a lot of years.

“[I am] just very grateful for the experience playing this year for the team, this organization, and over the course of my career, too. I appreciate it. I hope I’ve always tried to do the right thing out there.

“Who knows what the future holds? So I’ll leave it at that.”

Brady added: “I do not want to get too much into the future and stuff. I just don’t know what is going to happen and I am not going to predict it. No one needs to make choices at this point.”

Patriots coach Bill Belichick refused to say whether he thought Brady would be back.

Several New England players were asked about Brady’s future after the game.

“It has been the experience of a lifetime,” long-time Patriots captain Matthew Slater said of playing with Brady.

“He does things the right way, has all the success in the world, but still remains himself. I think that says a lot about who he is as a man.”

Defensive captain Devin McCourty said it’s difficult to predict what will happen in the offseason, when football decisions are strictly about business.