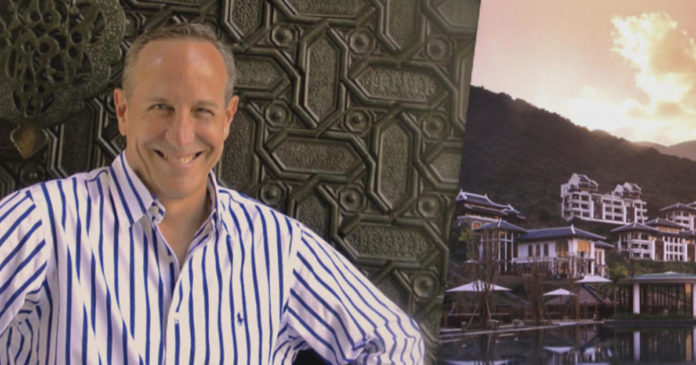 At Bill Bensley’s new luxury tented camp inside the largest rainforest in Cambodia, guests enter the property by racing down one of the longest ziplines in Asia.

Correspondent Ben Tracy asked, “What is the response from guests when they show up and realize they get to zipline into the hotel?”

“So far everybody has done it except for one,” Bensley said.

He calls this Shinta Mani Wild. He pitched the palatial rooms over a raging river, and the so-called “tents” don’t come cheap – they’re about $2,000 per night.

Bensley says his design inspiration was Jackie Kennedy; he created the kind of place he thinks she would have stayed at during her 1967 visit to Cambodia.

“What if the King had brought her on a glamping trip? What would that have been like?” he said.

And what does he think Jackie Kennedy would think of the place? “Oh, I know she’d love it,” he replied.

His confidence comes from experience. Bill Bensley has designed more than 200 hotels in 30 different countries. He’s one of the most famous hotel designers in Asia, known for the famed Four Seasons tented camp in Thailand;

And numerous luxury escapes in Bali.

Tracy asked, “Let’s talk about your style a little bit.”

“Wait a second, I don’t have a style!” Bensley retorted. “I want specifically not to have a style, because I want the next project to be a surprise. … I want everything to be different.”

“I have never seen you do concrete and glass and call it a day,” Tracy said.

He has been called “crazy,” and “crazy/sane.” Does he have a preference? “Crazy/sane sounds more professional, I think, don’t you?” he laughed.

“You might get more work that way,” Tracy said. “But crazy, I imagine, goes a long way in your line of work?”

“Of course it does, because who wants to go on vacation to a serious place?”

He is, however, quite serious about his work. At his studio in Bangkok, a team of 150 people is currently working on 100 different projects, and no detail is too small or too odd. (“I need to ask that dealer in Sri Lanka about two very large peacocks.”)

Bensley’s team doesn’t just design hotels; they create almost everything inside of them as well, from the artwork that hangs on the walls, to the uniforms worn by the staff.

Bensley then fills the hallways and rooms with antiques he’s collected from all over the world. He stores them in an enormous warehouse he calls “the cabinet of curiosities.”

At the Siam Hotel in Bangkok, one of his favorite and most famous projects, he built a massive atrium that brings the outside inside.

The hotel, which feels more like a very rich person’s home, is a black-and-white temple to Thai history. “There’s something like 5,000 antique, unique pieces here in the hotel, which are the story and the history of Thailand,” he said.

Bensley’s own story began in Anaheim, California, where he grew up in the shadow of Disneyland. After graduating from Harvard, he moved to Asia, where he launched his career. He’s now lived in Bangkok for nearly 30 years.

His house is like one of his hotels – a series of elaborate rooms and gardens. The 60-year-old shares it with his husband, Jirachi. The two have been together for nearly three decades.

Tracy asked, “You work together, you live together. How do you make that work and stay together for 30 years?”

“Jirachi is the boss and I do whatever I’m told,” Bensley laughed.

They spend much of their time in the garden, which is fitting because Bensley considers himself a gardener first, designing his projects, such as the elaborate tented camp in Cambodia, around the existing landscape. Building it, he says, is the hardest thing he’s ever done, but it’s a labor of love to protect this stunning forest from being destroyed by the logging industry.

Tracy said, “It seems it would be easier at this point in your career to kind of repeat yourself? Take something that worked somewhere and do it again?”

Bensley laughed heartily: “What I am really proud about is, every single one of our hotels is very different from the next, and that no one knows what to expect from me next. Once you start repeating yourself, you’re dead.”

And there is no doubt that Bill Bensley is still very much alive.