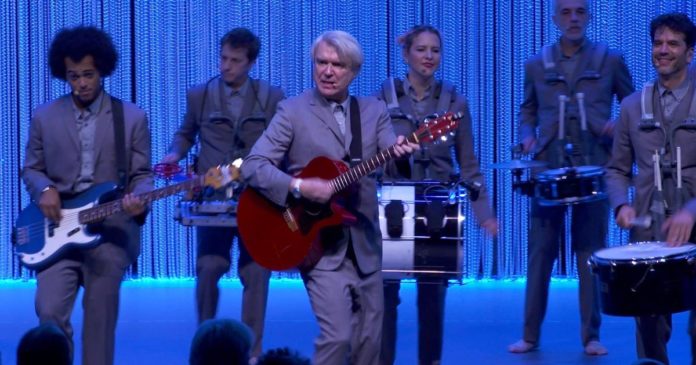 Take in David Byrne’s critically-acclaimed show on Broadway, and you might ask yourself, how did David Byrne get here?

“We’re gonna take you on a whole journey that’s not just a bunch of songs, and you’re gonna have a party,” he explained, “but you’re gonna be at a different place emotionally and intellectually or whatever by the end.”

The show, “American Utopia,” takes its name from Byrne’s last album, for which he developed an innovative and unusual stage show, drawing on more than four decades of making music.

And while much of the music is familiar, it’s clear Byrne is marching to a different beat.

The show begins with Byrne contemplating how a child’s mind develops: “Babies’ brains have hundreds of millions more neural connections that we do as adults.”

He explained to correspondent Serena Altschul, as he prepared to take the stage: “They come with all the vocal sounds, and they try ’em all out. ‘Let me see what my mouth can do!’ And then gradually they realize, ‘Oh, these are the ones that Mom and Dad use to talk to one another.'”

And if you’re wondering, Byrne is now a granddad. Byrne’s only daughter, Malu Byrne, gave birth to a son in 2018.

Altschul asked, “So, he must be the great joy of your life these days?”

Byrne himself immigrated to the U.S. at the age of eight with his Scottish parents. “I felt like a little bit of an outsider. But I realized that the world was made up of people that were different, but we’re all here.”

Music helped a young David Byrne find his voice: “Even though I was painfully shy, I could put myself on stage and perform and do really sometimes wacky things. I had no fear on stage. And then coming off the stage, I was frozen as far as social interaction.”

“I love the way you kind of described yourself as painfully shy – it’s hard to believe,” Altschul said.

“We change. Thank God we can change!” he laughed.

Byrne wanted to become a visual artist, but fell into playing music with college friends, Tina Weymouth and Chris Frantz. That band would become the Talking Heads. But almost from the beginning, the band fought over songwriting credit and creative control.

Altschul asked, “If you could kind of time-machine back to the ’70s and your early days, what would you say to yourself?”

“Do you feel you were more controlling back then?”

The Talking Heads perform “Once In a Lifetime,” from their 1980 album, “Remain in Light”:

And it didn’t. In 1991, Weymouth and Frantz learned that the Talking Heads had broken up by reading about it in the L.A. Times. But the end of the Talking Heads was just the beginning of David Byrne’s artistic odyssey.

He’s started a record label specializing in world music; put out a number of solo albums; and worked with scores of musical partners.

He said, “I think I am a better collaborator. Now I give more leeway. I give more, but I think by giving more, I get more.”

Touring with “American Utopia,” Byrne decided to ask the students of the Detroit School of Arts to record a version of his song, “Everybody Is Coming to My House.”

“They changed the meaning of the song, for me,” he said. “I looked at their performance on video and I thought, they’ve brought out a different meaning in the song than when I do it.

“When I do it, it just seems the person’s not quite sure if they want everybody coming over to their house. But on their version, it’s like, ‘Yes, come on over!’ I kinda liked their version better.”

Of his band, Byrne said, “There are lot of people from all over …. I myself am a naturalized citizen from Scotland.”

That happened in 2012, after he had an unlikely run-in at the voting booth: “‘Cause I was busted,” he laughed. “I firmly believed that green card holders could vote in elections as long as they didn’t vote for president. And I did it!  I did it for many years. See? They were right. There’s a lot of voter fraud!”

Byrne is passionate about being a good citizen of the world, but like many, has struggled with current events. So, he created an online forum, “Reasons to Be Cheerful,” to spotlight the ways the world is working.

Altschul asked, “Is that kind of where you are in your life now? Are you a more optimistic, joyful person these days?”

He laughed: “I asked myself the exact same question: Am I a different person than I was before? Is my innate nature joyful and optimistic, or – I think this is maybe more likely – that I love working with these musicians so much, I love performing, I love what I’m doing, I love the message that we’re putting across, that that gives me optimism.”

You can stream the original cast recording of “American Utopia on Broadway” by clicking on the embed below (Free Spotify registration required to hear the tracks in full):