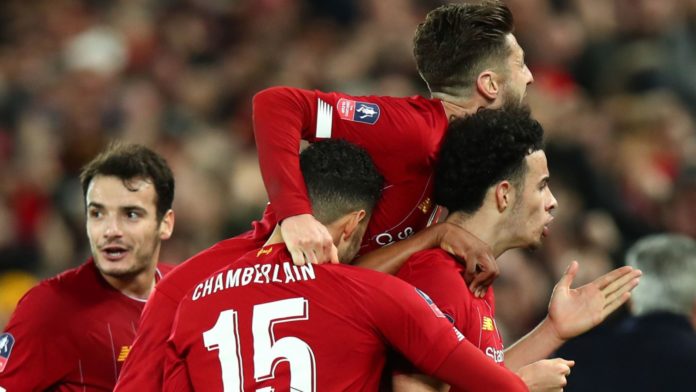 Curtis Jones’ thunderbolt inflicted one of Everton’s most humiliating derby defeats as a youthful Liverpool progressed to the fourth round of the FA Cup with a 1-0 victory at Anfield.

Eighteen-year-old Jones settled the third-round tie in Liverpool’s favour on 71 minutes with a sensational whipped strike that cannoned in off the underside of the Everton crossbar.

Everton had looked set to capitalise on Jurgen Klopp’s nine pre-match changes as they peppered the Liverpool goal and forced three quality saves from goalkeeper Adrian in a dominant first-half display.

But Jones’ stunning first goal in senior football saw Everton pay the price for missing a host of chances as the Toffees’ wait for a first Anfield win since 1999 continued.

Man of the Match: Curtis Jones

Liverpool’s congested festive schedule left Klopp with no option but to shuffle his pack and he fielded an experimental Reds team that featured three teenagers in a Merseyside derby starting line-up for the first time since 2012.

3 – Liverpool have named three teenagers in their starting XI for a Merseyside derby (Elliott, Williams, Jones) for the first time since October 2012 (Sterling, Suso, Wisdom), a 2-2 draw in the Premier League at Goodison Park under Brendan Rodgers. Experimental. #FACup pic.twitter.com/yjnsJzIKRP

Everton, meanwhile, were at near full strength and it showed as they created the best chances in a dominant first-half attacking display.

Dominic Calvert-Lewin drew Adrian into a save with his legs inside six minutes, an attack which forced James Milner off injured. With Joe Gomez now the only senior defender on the field, the Everton chances kept on coming.

Mason Holgate headed a glorious chance straight at Adrian from Gylfi Sigurdsson’s inch-perfect free-kick on 12 minutes and the Liverpool goalkeeper was up to a hat-trick of saves before the half-hour mark as Richarlison was denied as he tried to convert Theo Walcott’s cutback.

There was time for Calvert-Lewin to spurn another chance, mistiming a diving header, before Liverpool finally registered their first attempt on goal.

January signing Takumi Minamino could have endeared himself to the Anfield faithful with a debut goal, but he failed to connect with a header after Divock Origi’s sumptuous cross reached the Japan international unmarked in the six-yard box.

Origi drew a stunning fingertip save out of Jordan Pickford just before half-time and that marked a shift in momentum. The Reds re-emerged from the interval and dominated possession with a performance akin to the first-choice side that have raced clear at the top of the Premier League.

The introduction and deployment of Alex Oxlade-Chamberlain into central midfield on 70 relieved Jones of his defensive responsibilities – and within a minute of venturing forward, the youngster settled the tie in the most spectacular fashion.

After a neat interchange with Origi, Jones unleashed a stunning curled shot that sailed over Pickford before crashing down off the underside bar, sparking jubilant scenes inside Anfield and inflicting a crushing blow from which Everton could not recover.