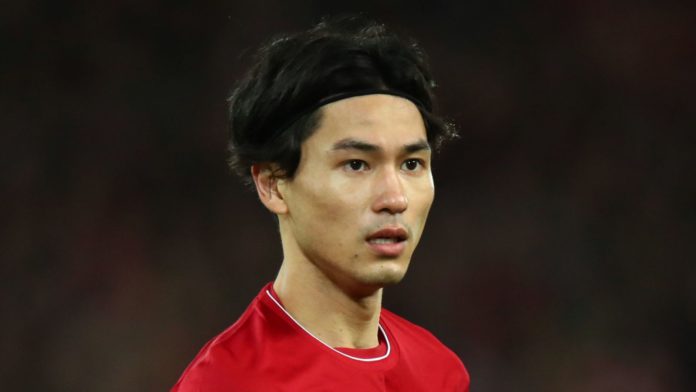 Takumi Minamino made his debut for Liverpool in their 1-0 win over Everton in the third round of the FA Cup at Anfield.

The 24-year-old Japan international joined from Red Bull Salzburg in the January transfer window for a bargain fee of £7.25m after impressing in the Champions League against Jurgen Klopp’s side.

Named as part of a second-string line-up in the FA Cup, that might ordinarily have meant that Minamino was making a low-key start to his Anfield career. The identity of the visitors changed that.

Instead, it was a raucous introduction to English football, but two years to the day since Virgil van Dijk marked his Liverpool debut with a winning goal in this exact fixture, Minamino had a quieter first game for the club.

He looked lively in the early stages. Although Divock Origi makes for a more robust physical presence in attack, it was the Belgian who drifted off to the flanks with Minamino playing as a central striker.

There were some promising interchanges with Harvey Elliott and a clear willingness to make runs in behind the opposition defence.

Minamino certainly looks well-suited to playing the pressing game that Klopp favours and will no doubt prove an important option in attack as the fixtures continue to pile up.

But the new man did fade after the break and perhaps that is to be expected given that this was his first appearance in almost four weeks – since starring against Liverpool for his old club.

He was withdrawn in favour of the returning Alex Oxlade-Chamberlain with Curtis Jones promptly scoring the winning goal just moments later.

Not a stellar individual debut then. But a role in an FA Cup victory over Everton is not a bad way to start. Takumi Minamino will hope there are many more great Anfield nights to come.

34 – Chance! Fails to connect properly with his head from Origi’s left-wing cross

70 – Substituted to warm applause with Oxlade-Chamberlain replacing him