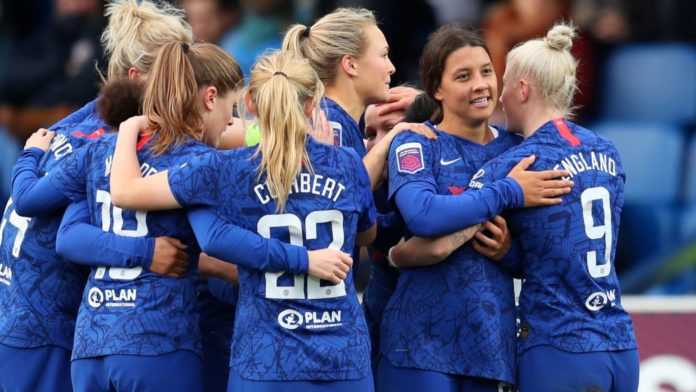 Arsenal began 2020 with a 2-0 win over Birmingham City while Australia international striker Sam Kerr got off to a winning start at Chelsea, who came from a goal down to beat Reading 3-1 as the FA Women’s Super League resumed on Sunday.

Kim Little and Jordan Nobbs both scored in the first half to keep champions Arsenal at the top of the table, while second-placed Manchester City also netted all of their goals in the opening 45 minutes as they thrashed Tottenham 4-1.

Chelsea fell behind to Reading in the 15th minute but the game swung in their favour when Reading keeper Grace Moloney was sent off for scything down Kerr, who later set up Bethany England with a clever backheel to equalise in the 40th minute.

Kerr continued to cause problems in the second half as Guro Reiten lobbed home a rebound from her blocked shot and Erin Cuthbert added a third to leave Chelsea in third spot in the table on 26 points, four behind leaders Arsenal and one behind Manchester City, with a game in hand over both clubs.

Bristol City beat Manchester United 1-0 to notch their first league win of the season, leaving bottom side Liverpool, who lost 1-0 to Brighton & Hove Albion, as the only team without a league victory so far this term.

West Ham’s home game against Everton was postponed after the London club was struck by an outbreak of flu virus, and the game has yet to be rescheduled.