Home World As Bushfires Blaze On, Parts of Australia Broil With the Highest Temperatures...

The top ten hottest places on Earth all were in Australia yesterday — and not in the normally blazing outback but around the coastal city of Sydney.

Hottest of all was the suburb of Penrith, which on Saturday, Jan. 4 reached 48.9 degrees C. That’s a Death-Valley-like 120 F.

The heat and accompanying high winds spurred bushfires to new heights of ferocity. The fires, in turn, generated their own thunderstorms, which whipped up the flames even more — and ignited new blazes with fire tornadoes and dry lightning.

“There are a number of fires that are coming together – very strong, very large, intense fires that are creating some of these fire-generated thunderstorms, said Shane Fitzsimmons, Commissioner of the New South Wales Rural Fire Service.

If I had to choose just one image to illustrate what has been happening, it would be the one at the top of the story. It shows one of many blazes burning out of control in New South Wales on Dec. 31.

To create this view, remote sensing expert Pierre Markuse used image data collected by the Sentinel-2 satellite in the infrared portion of the electromagnatic, allowing us to visualize areas of blazing fire. He combined that with data collected in the visible portion of the spectrum, highlighting the billowing fire clouds. The result is an image of extraordinary power.

For a high-resolution version of the image that you can zoom in on, please see it here on Markuse’s Flickr photostream.

I created it using images captured just hours apart on Jan. 4, 2020. The first image in the animation was acquired shortly before noon by NASA’s Terra satellite. It shows relatively thin plumes of smoke streaming from multiple fires.

Just four hours later, the situation has changed dramatically for the worse, as seen in the second image, acquired by the Aqua satellite. With high winds and the buidling brutal heat of the day, the fires have exploded in intensity. And now, giant fire-spawned thunderstorm clouds, known scientifically as pyrocumulus clouds, have formed as updrafts over the blazes have carried water vapor and ash higher and higher into the atmosphere.

For the full-sized version of the first image in the animation, go here. And for the second one, here. 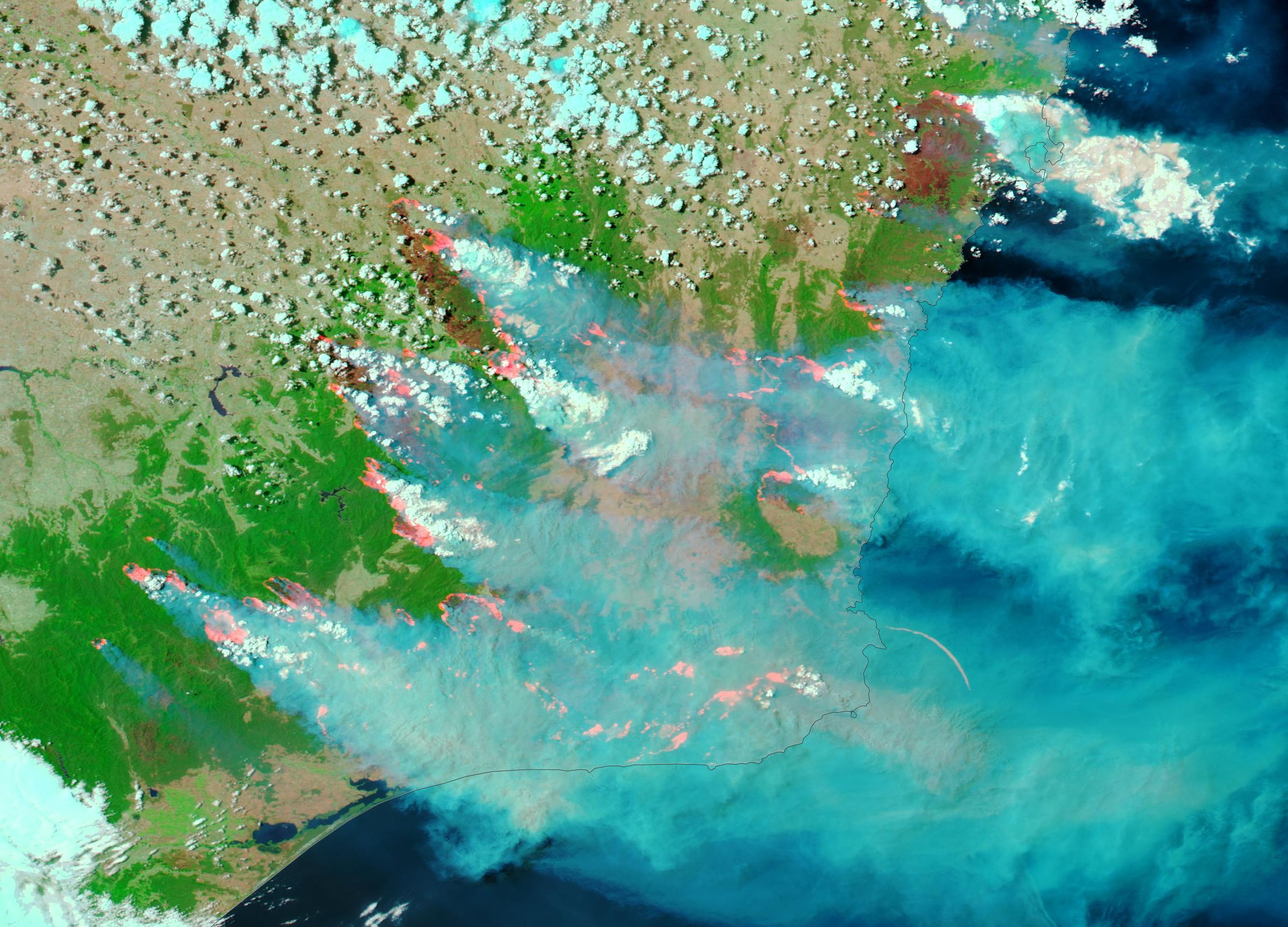 This view combines visible and infrared wavelengths of light acquired by Aqua to reveal the areas of active burning that spawned the pyrocumulus clouds. Also visible are burn scars left by blazes. The image takes in an area about 300 miles across.

For a full-resolution version of the image, please go here. 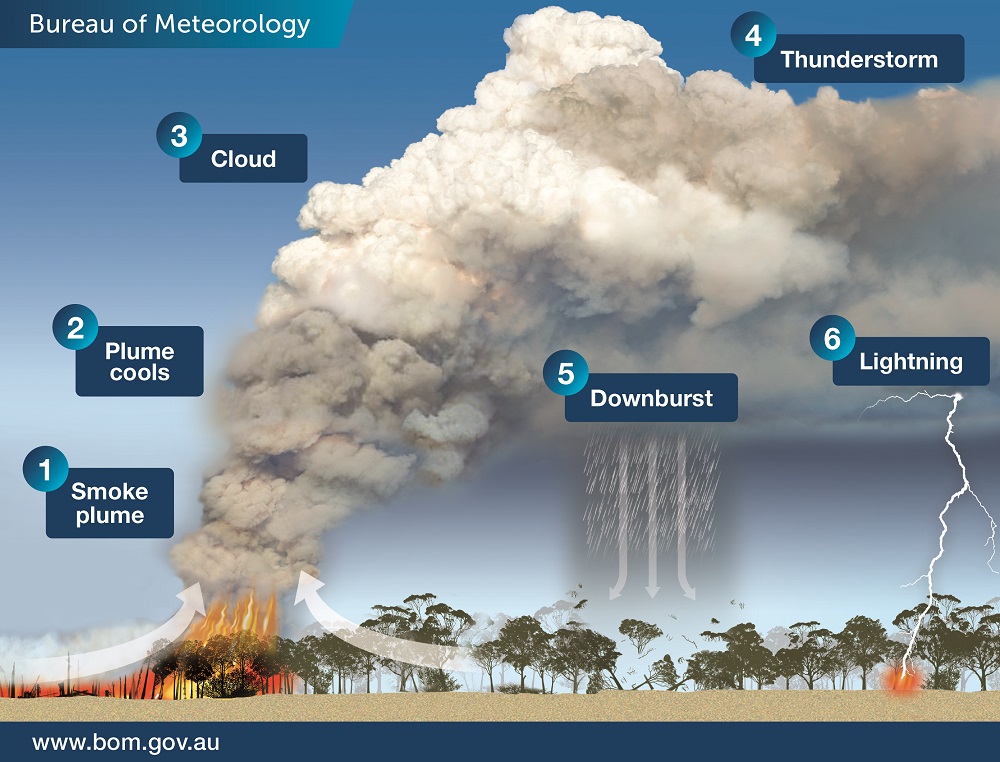 As smoke and hot air rises in turbulent updrafts over a wildfire (1), the atmospheric pressure drops, causing the plume to expand and cool (2). This prompts water vapor to condense into water droplets on ash particles, forming a giant cloud (3). At the same time, the condensation process releases heat, which makes the cloud more buoyant, spurring it to blossom ever-upward, forming a pyrocumulus cloud — a thunderstorm born of fire (4). As with a regular thunderstorm, a pyrocumulus cloud can produce damaging downbursts (5). And ice particles in the very cold upper parts of these clouds can collide and build up electrical charges that are released by lightning (6). (Source: Australian Bureau of Meteorology)

Since September, more than 22,000 square miles of Australia have been scorched by hundreds of bushfires. That’s an area about half the size of Pennsylvania. (To get a feel for the extreme extent of the fires, check out this interactive map produced by the Guardian.)

So far, more than 20 people have perished in the blazes. 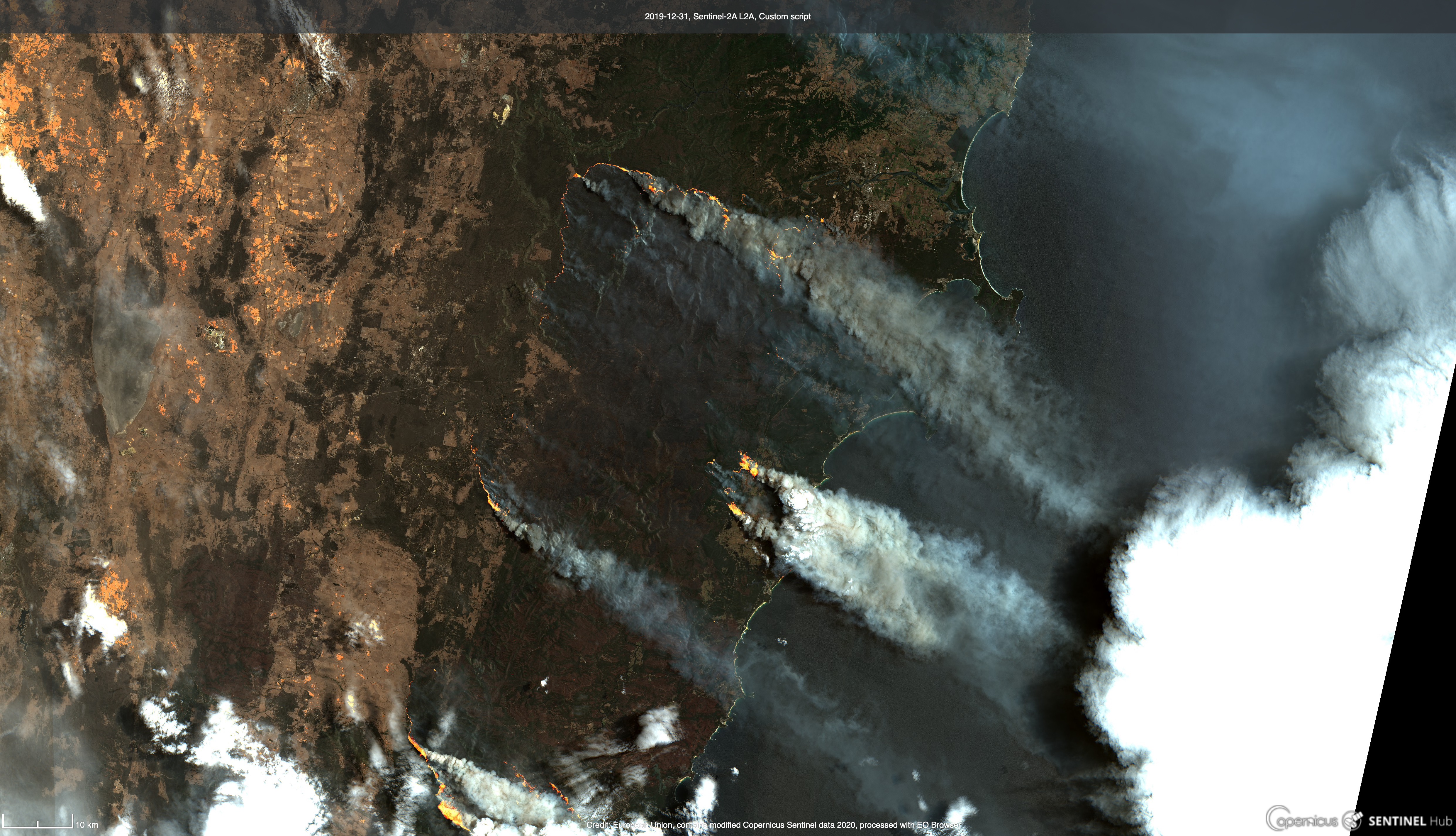 I’ll finish with this image, acquired by the Sentinel-2 satellite on New Year’s Eve, the same day as the image at the top of the story. It too combines wavelengths of light in the visible and infrared portions of the spectrum, creating a kind of hybrid — an image with natural colors but also revealing the heat of active fires.

For a much clearer, full-resolution verison, click here to see the image on my Flickr photostream. I’ll be uploading more images like this in the coming days.

I’m also planning to follow up this story with another on the Australian fires — one that will focus more on the smoke they’ve produced. The plumes have blown more than a thousand miles out over the Pacific, turning the skies red over New Zealand and darkening the snow on high peaks there with ash-fall. So I hope you will check back.