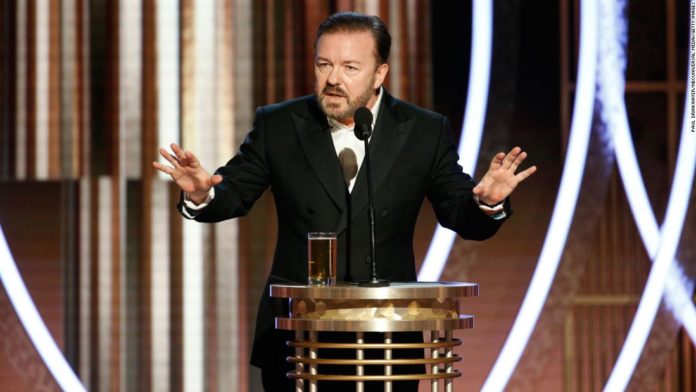 The comedian said that since this would be his final time hosting, he didn’t care who he offended.
Clearly, he did not.
Gervais quipped that while most celebrities took a limousine to the event, he took a regular car with a license plate “made by Felicity Huffman” — a jab at Huffman’s recent prison stint for her involvement in the college admissions scandal.
Another joke pertained to the Me Too movement, with Gervais saying that the ballroom was filled with powerful studio executives and that “they are all terrified of Ronan Farrow, ” adding, “He’s coming for you.”
Farrow published an investigation about former film producer Harvey Weinstein in The New Yorker in 2017.
Gervais also joke about Martin Scorsese’s height and Leonardo DiCaprio’s reputation for dating younger women.
“Leonardo DiCaprio attended the premiere of the movie [“Once Upon a Time in Hollywood”], by the end his date was too old for him. Even Prince Andrew was like ‘come on man, you’re nearly 50,'” the host joked, drawing big laughs from the audience — DiCaprio included.
Gervais has earned a reputation for his harsh humor at the helm of the Globes. He first hosted in 2010 and went on to helm the gig in 2011, 2012 and 2014.