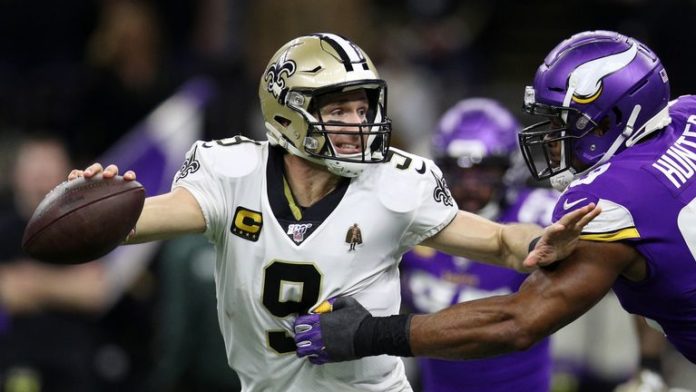 Kirk Cousins led a 75-yard overtime drive that included a 43-yard pass to Adam Thielen to lead the Minnesota Vikings to a 26-20 win over the New Orleans Saints at the Superdome.

Cousins went 19 of 31 passing for 242 yards and a touchdown pass to Kyle Rudolph in overtime to set up a Divisional round meeting with the San Francisco 49ers.

Dalvin Cook was instrumental for Minnesota with 94 rushing yards off 28 carries for two touchdowns in an approach designed to stop Drew Brees and the Saints offense from building any momentum.

Brees finished the game 26 of 33 for 208 yards, one touchdown and one interception.

Having won the toss and electing to receive, the Vikings’ opening drive got off to a disastrous start as Thielen fumbled on a catch and run following a tackle from former New York Giants cornerback Janoris Jenkins.

Vonn Bell was at hand to scoop up the loose ball and set the Saints up on the Vikings’ 37-yard line.

New Orleans were unable to turn the ensuing drive into a touchdown as a combined effort from Danielle Hunter and Everson Griffen to sack Brees saw the hosts settle for a 29-yard Wil Lutz field goal.

A run-heavy approach from the Vikings offense began to materialise upon their return to the field, with running back Cook taking the hand off on four of the first five plays on an 11-play drive ending in Dan Bailey’s game-tying 43-yard field goal.

The Vikings had seen a trick play attempt fail after Stefon Diggs was sacked for a loss of six yards having taken the hand-off from Thielen at the Saints’ 28.

Both sides then exchanged punts on back-to-back occasions before Taysom Hill sparked the Saints offense into life with an 11-yard scurry on a second-and-five.

He followed this up with a 50-yard pass to Deonte Harris, who burned Vikings cornerback Xavier Rhodes in coverage to set up a four-yard rushing touchdown from Alvin Kamara, Lutz kicking the extra point.

Minnesota turned to the superb Cook for inspiration once again as he and fellow back Alexander Mattison accounted for six of the 13 plays in a drive finishing with just a 21-yard field goal from Bailey.

Anthony Davis thwarted Brees and the Saints in reply, with the NFL’s joint-leader in interceptions rising to pick off Brees on a hopeful pass intended for Ted Ginn in double coverage.

Cook walked in for a five-yard touchdown on the next drive following Thielen’s 13-yard pickup on third down, putting the Vikings up 13-10 after Bailey’s extra point.

Lutz missed a 43-yard field goal attempt at the end of the first half after the electric Harris had supplied a 54-yard runback.

The first three drives of the second half ended in punts, until the Vikings extended their lead to 20-10 with a one-yard touchdown run from Cook, despite an excellent effort from Demario Davis to stuff him at the goalline.

This came after Diggs had done well to keep hold of a Cousins arrow for a nine-yard gain and both his first target and catch of the day.

Cousins was left counting his blessings shortly after when he fumbled under a huge hit from Cam Jordan on a play-action attempt, the Saints’ sack leader picking up the ball and racing to the endzone only to see flags on the field for a false start against the Vikings.

The Saints were back on the board early in the fourth quarter when Hill reeled in a pass from Brees on a wheel route for a 20-yard touchdown.

It wouldn’t be Wild Card weekend without some drama, this time Brees fumbling under pressure from Hunter to give the Vikings the ball back at their own 37 with four minutes to play.

Sean Payton’s men thought they might get the ball back moments later as Cook fumbled following a tackle from AJ Klein. Bell was there to recover and return for a touchdown, before a review of the play deemed Cook to have been down.

After the Vikings were forced to punt on fourth-and-23 on the back of Cousins being sacked, the Saints worked an opportunity to level the score with a field goal, Lutz making no mistake from 49 yards to send it to overtime.

Cousins conjured a decisive 43-yard pass to Thielen to put the Vikings on the Saints’ two-yard line, before lofting to Rudolph three plays later for a four-yard game-winning touchdown.