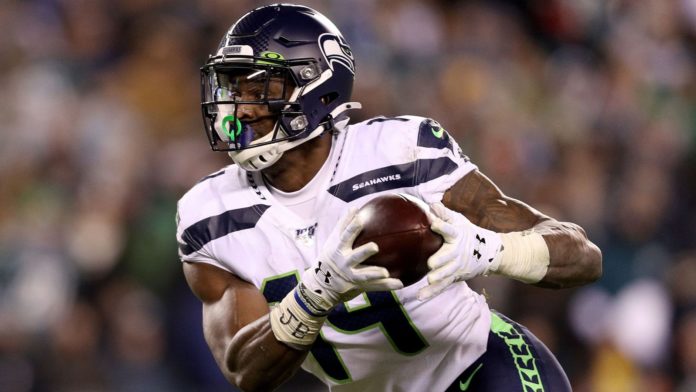 DK Metcalf had 160 yards and the game-sealing catch as the Seattle Seahawks beat the Philadelphia Eagles 17-9 in the final Wild Card round matchup in the NFL playoffs.

Eagles quarterback Carson Wentz – making his playoff debut – was knocked out of the game in the first quarter by a helmet-to-helmet hit from Jadeveon Clowney, and did not return with what was described as a head injury.

He was replaced by 40-year-old backup Josh McCown, who went 18 of 24 for 174 yards in an impressive effort off the bench.

Meanwhile Russell Wilson had a fantastic outing for Seattle, completing 18 of 30 passes for 325 yards and a touchdown, adding 45 yards on the ground and coming up with crucial third-down conversions throughout the game.

Both sides struggled to move the ball early in the game, but Philadelphia were rocked when Wentz went to the locker room ahead of just the third drive of the day.

Both teams had exchanged field goals with neither offense finding a rhythm – the Eagles defense thwarting Wilson and McCown finding his feet in his first playoff appearance of his 17-year career – but the Seahawks finally put together a touchdown drive with a nine-play, 77-yard effort just before half-time.

Rookie receiver Metcalf came free across the middle of the field for a 26-yard gain, David Moore broke a tackle to pick up 38, and Marshawn Lynch capped the drive with a vintage ‘Beast Mode’ run from five yards out to give Seattle a 10-3 lead.

To start the second half, the Eagles’ offense came out firing. On the very first play, McCown fired deep to Zach Ertz for a 32-yard gain, while a pass interference penalty two plays later added 20 yards more. However, they were forced to settle for a field goal as McCown was sacked by KJ Wright.

Wilson immediately made them pay for not securing seven points.

Just five plays into the ensuing drive, after a Wilson flip to Lynch had picked up 20 yards, Wilson threw a perfect deep ball to Metcalf from 53 yards out. The big wideout dove to make the catch, got back up, and carried a defender on his back to find the end zone and extend Seattle’s lead to 17-6.

But McCown did not give up, and he found Dallas Goedert and Greg Ward for 14-yard pickups, before Boston Scott broke free for a 21-yard run to get the Eagles close to the red zone. A Jake Elliott 38-yard field goal brought them back within a score at the end of the third quarter.

The fourth quarter was defined by defensive stands by Seattle.

First, after the Eagles had made it all the way down to Seattle’s 24 with six minutes remaining, they opted to go for it on fourth down and McCown’s pass was just a little behind Sanders, who couldn’t secure the catch for the first.

After they got the ball back, Philadelphia again moved the ball downfield with ease. However, Seattle’s defense again tightened up at the goal line and it was Clowney who ultimately dragged down McCown on fourth and seven at the 10-yard line.

As the Eagles still had all three timeouts with two minutes remaining, the Seahawks had to pick up a first down to avoid giving the ball back again and they did with another clutch Wilson conversion. On third and 10, Metcalf again beat his defender deep, and a perfect throw allowed Metcalf to rise high and secure a 36-yard catch and the win.

With the Minnesota Vikings shocking the Saints in New Orleans and booking a trip to San Francisco, it means Seattle will travel to face Aaron Rodgers and the Green Bay Packers next weekend.