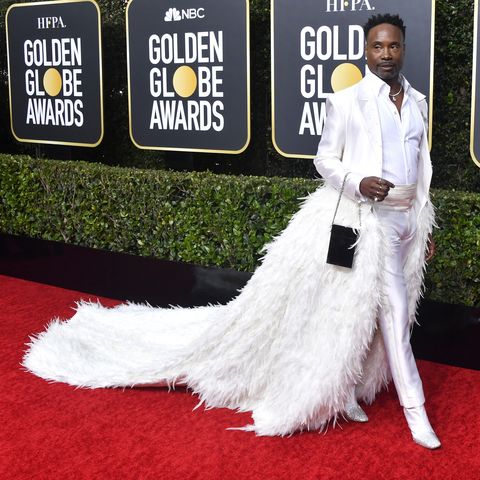 Life is full of unanswerable questions. What does it all mean? Where do we go when we die? Is a hotdog a sandwich? No one knows! Thankfully, though, there are some questions to which we immediately know the answer, right down in our bones. So, will everyone be talking about Billy Porter’s white, feather-covered tuxedo-and-train situation on Twitter tonight and at your office tomorrow? Yes. Yes, they will.

That’s not exactly shocking, when you consider the man’s red-carpet prowess. He basically broke the internet with his tuxedo gown at the Oscars last year. And then he followed it up with something even bigger, when he was carried into the Met Gala by no less than six shirtless men while dressed as a gilded sun god. Of course everyone has their eyes on him for the first big awards event of 2020, the always-riotous (and sometimes in a good way) Golden Globes. And (also of course) Porter didn’t disappoint. The Pose star arrived in a white tuxedo with a gigantic train that’s absolutely covered in gleaming-white feathers. 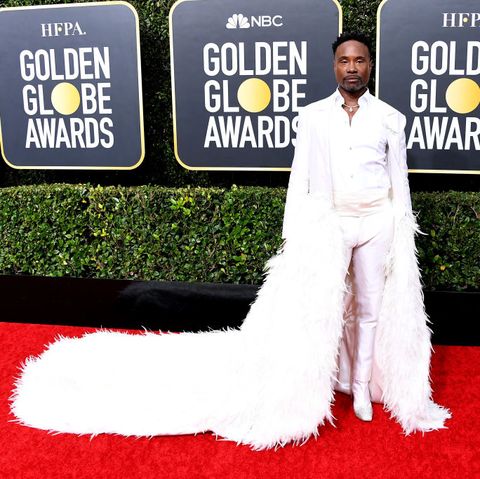 Billy Porter walks the red carpet of the 2020 Golden Globes.

It is not a timid look. It is designed to demand your attention, and it does the job perfectly. Would you expect anything less from Porter? His Pose character, Pray Tell, knows how to command a room, but that expertise isn’t limited to his roles. Porter’s a pro—he can do it IRL just as well as he does it on screen. Maybe even better? Ah, well, that’s just another one of life’s unanswerable questions.