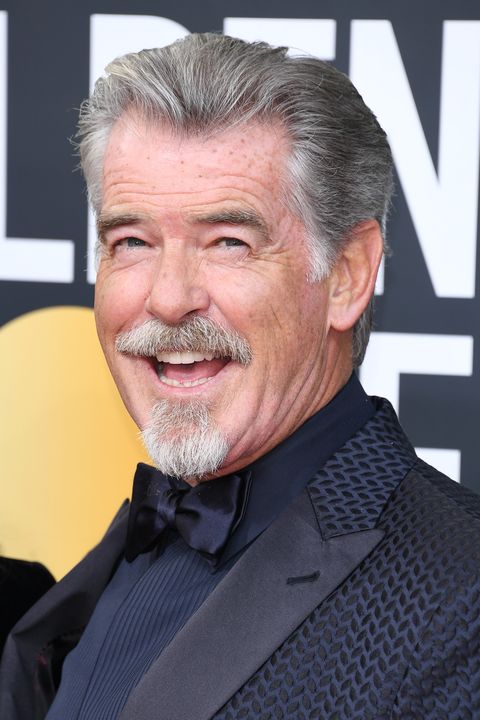 If you know anything about the Golden Globes, you know “who wins” and “who should have won” are not statements worth wasting your brain space on. No, where you should be focused is on the red carpet, where awards season’s most chilled-out show lends itself to a personal style paradise.

But that’s not what brings us to printed-shirt flexing, sons-having friend-of-the-brand Pierce Brosnan. What brings us to Brosnan is his facial hair. Just last month, we spotted him playing with separates and sporting a regular ol’ beard. If we’re talking remarkable, it was the fit, not the face. But as Brosnan arrived at the Globes red carpet Sunday, the story was quite the opposite. To be honest, I don’t exactly love the fit. Navy was a nice choice, but the praise stops there (and we can leave it at that).

Don’t worry about that though, let’s zero in on the moneymaker. Not only is the skincare routine on a hundred-thousand-trillion—this little facial hair number is carrying some serious prowess. It’s called a Van Dyke, and it’s not named after Dick. Its namesake, Dutch painter Anthony van Dyck has been dead since 1641 (and the spelling eventually shifted in popular usage from “van Dyck” to “Van Dyke”). Which sucks, because he would have loved to know a former Bond was rocking his ‘stache and goatee legacy at the Globes (if he knew what the hell Bond or the Globes were.)

I digress. This is a daring facial hair move, but not so daring that I would ever dream of deterring you from trying, dear reader. This isn’t reserved for Colonel Sanders and Johnny Depp characters. In fact, I hope Brosnan keeps it a while and takes the Van Dyke title away from the aforementioned. Then you might feel more confident going forth. Then you might pull up the above photo and set it on your sink whilst you shave. Then you might have someone tell you, “You look like Pierce Brosnan at the 2020 Golden Globes.”