Home Lifestyle Jason Momoa Wore a Tank Top at the Golden Globes Because of... 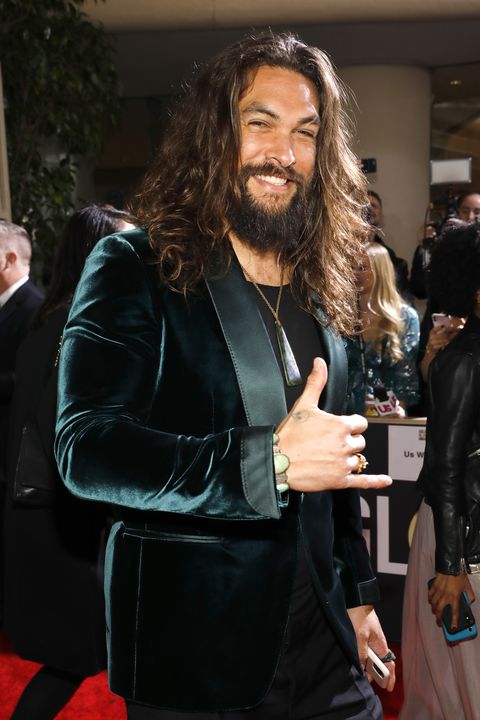 Jason Momoa does his own thing. He wears scrunchies and manages to look great. He busts out the velvet to match his scrunchie. He steals dogs (well, sorta) and makes it not only okay but downright charming. Consider, if you will, the scene that leads off our cover story on the man:

Jason Momoa did not steal the dog. He wants to make that absolutely clear. He’s just borrowing him for a little while. Sure, yesterday he walked off the set of his new Apple TV+ show, See, with the slobbery German shepherd puppy who plays one of a scrappy pack, and sure, he brought the puppy back to his Vancouver hotel suite to cuddle with him in bed for eight hours, and sure, he immediately renamed him Rama, which was the name of a dog once belonging to his wife, Lisa Bonet, but this is all just a temporary arrangement.

See? Not stealing, per se, but kinda stealing, and you still love him for it. All of which is to say that when Momoa throws a curve ball—by, for instance, wearing a black tank top at the Golden Globes ceremony—it feels less “uncouth” and more, well, “cool.”

Yep. That’s Momoa, who walked in wearing a velvet dinner jacket, sittin’ pretty in just the tank top that was chilling underneath. And, yep, it kind of works! I mean, it helps that he’s got arms that look like that, and a big damn smile on his face, and Brian Cox is looking at him and pointing as if to say, “Hey, look at those arms and that smile!” But it’s still an incredible little moment—and one that you and I should probably not attempt to recreate. Leave the advanced Momoa Moves to Momoa himself.