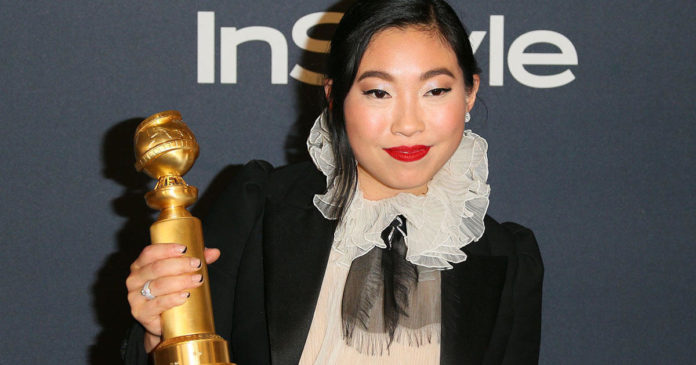 Awkwafina made history during the 77th Annual Golden Globe Awards. The star of the hit indie family drama “The Farewell” became the first woman of Asian descent to win a Globe for best actress in a comedy or musical.

“If anything, if I fall upon hard times, I can sell this,” Awkwafina joked Sunday night, holding the award. She dedicated her win to her father and grandmother as well as her late mother.

The rapper and actor also thanked Lulu Wang, who wrote and directed “The Farewell.” The film was based on Wang’s personal experiences, some of which were also featured on an episode of the NPR radio show “This American Life.”

Awkwafina described the experience of making the film as “incredible.”

“You gave me this chance — the chance of a lifetime — and you’ve taught me so much,”  she said.

In “The Farewell,” Awkwafina plays Billi, who was raised in the U.S. but is determined to organize a family gathering for her grandmother in China after receiving dire medical news about her. It was nominated for the best foreign film Golden Globe and has received numerous awards and critical acclaim.