Home Culture Patricia Arquette decries US ‘on the brink of war’ 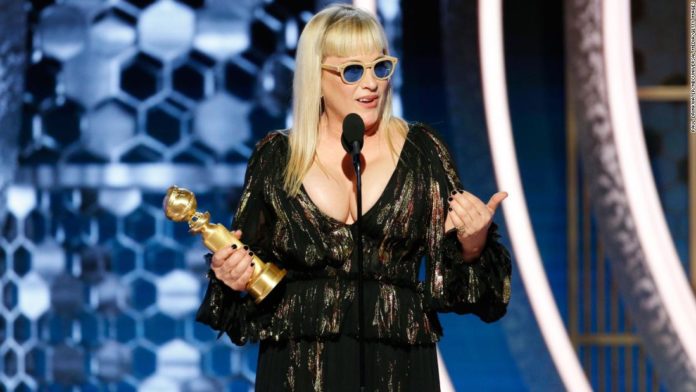 “I’m so grateful to be here and celebrate this but also I know tonight, January 5, 2020, we’re not going to look back on this night … in the history books we will see a country on the brink of war,” Arquette said. “The United States of America, a President tweeting out a threat of 52 bombs including cultural sites. Young people risking their lives traveling across the world. People not knowing if bombs are going to drop on their kids heads and the continent of Australia on fire.”
Arquette’s comments come as the US is deploying thousands of additional troops to the Middle East following the airstrike that killed Iranian commander Qasem Soleimani. On Sunday evening, President Donald Trump reiterated his threat to target Iranian cultural sites.
She added Sunday: “So while I love my kids so much, I beg of us all to give them a better world. For our kids and their kids we have to vote in 2020 and we have to get — beg and plead for everyone we know to vote in 2020. Thank you.”
Arquette, who won for best performance by an actress in a supporting role in a TV movie or limited series for “The Act,” has long been an outspoken critic of Trump and his administration.
Last year, she used her speech at the Screen Actors Guild Awards to thank former Special Counsel Robert Mueller and “everyone working to make sure we have sovereignty for the United States of America.”