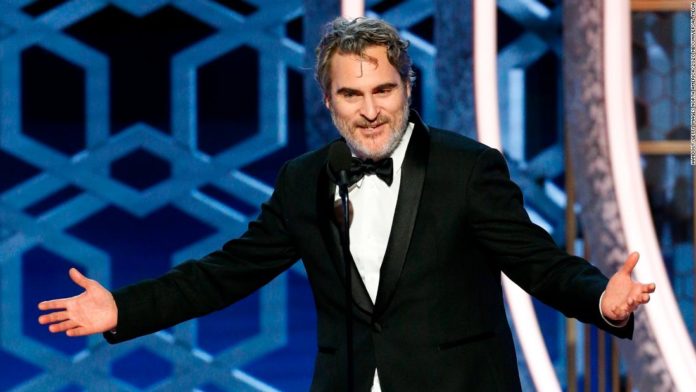 At Sunday’s Golden Globes, the “Joker” star accepted his award for best actor in a drama film with a rambling and heavily-bleeped speech that addressed the climate crisis, paid tribute to his fellow nominees and contained a sweet nod to fianceé Rooney Mara.
“Contrary to popular belief, I don’t want to rock the boat. But the boat is f—— rocked,” Phoenix said in a statement partially redacted by network censors.
He went on to address the fires in Australia and the ongoing the climate crisis, calling on Hollywood and his peers to do better.
Among his suggestions? Not taking “private jets to Palm Springs.”
Phoenix said that he, too, is working to do better.
He praised the Hollywood Foreign Press Association, which is behind the annual awards, for the “bold move of making tonight plant-based.”
The decision to serve a vegan feast at the Golden Globes was made out of concern for climate change, the HFPA said earlier this week.
Phoenix thanked his fellow nominees, saying, “I really do feel honored to be honored with you.”
He also thanked “Joker” director Todd Phillips — calling him an “amazing friend and collaborator” — and got choked up when addressing Mara.
“Rooney, I love you.”
He added: “I’m so grateful for this night and all of you. Thank you.”
Phoenix’s win marks the second time he’s won a Golden Globe. He won his first in 2006 for playing Johnny Cash in “Walk The Line.”