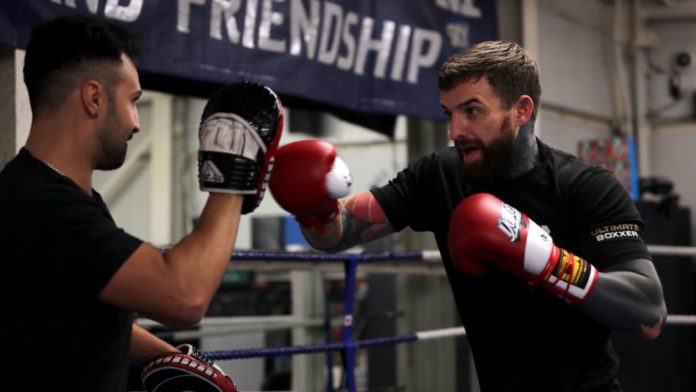 Being written off as the ‘former reality TV star’ clearly irks Aaron Chalmers. Now fully dedicated to MMA, the 32-year-old is looking to be first and foremost recognised as one of Bellator’s top fighters.

Since turning pro, the ex-Geordie Shore man has carved out a 5-1 record, and is one of European MMA’s highest profile stars. Naturally, his celebrity profile has gone a long way in fast-tracking his career inside the cage, and he does recognise there are pros and cons.

“I don’t do anything but MMA now,” he told Sky Sports. “My whole life revolves around training. So it would be nice to lose that name-tag one day, but if it wasn’t for the reality TV, I probably wouldn’t be standing here. So I’ve got to take it as it comes.”

I don’t do anything but MMA now. My whole life revolves around training

His background has led to criticisms from certain quarters, but he feels he ought to be judged on the merits of his MMA career alone.

“I’ve only fought for two-and-a-half years,” he reasoned. “I’m walking out in front of an arena [with] people booing, and I’m doing what I like to do. So if people want to hate, then so be it. Every fighter is criticised, me more than any because of the crossover. But if you listen to what MMA fans say, I would never leave the house!

“So you just need to do what you do. If people hate, then so be it.”

Many have questioned the calibre of his opposition thus far, but he likes to remind people of the relatively early stage of his fighting career:

“I look at a lot of records and stuff. I’ve had no amateur [career]. I’ve had six fights – 5-1. I’m looking at loads of fighters that have criticised me, and their records are my level. And they’re fighting 0-0s.

“It’s easy to criticise me because I’m in the limelight, but look back at your record before you start calling [out] someone else’s. Unless you’re fighting 10-0s, 20-0s, at my level which no one is, then don’t say anything.”

The first stop of what he hopes is a breakthrough year in 2020 is at the 3Arena in Dublin – when he takes on Austin Clem in Febraury.

“My first ever MMA show to watch was in 3Arena, so that’s when I got the taste for it,” he explains. “Two years later I had my first fight. But I’ve been to 3Arena four times now. Every time it just blew my mind.

“So when that opportunity came up, there was no qualms of taking it. The Dublin crowd, which I think I have a lot of them on my side, is just amazing. So I want to make a statement here so that every time they (Bellator) come back, hopefully I get the call.

“I’m just taking every fight as it comes. I want a busy year this year. Last year was quite disappointing. I was meant to be on the London card, but some problems at home and stuff, just didn’t make it work out. So I would like to get four fights in this year, and that kind of gets us right up to where we want to be and start fighting better opposition.”

So what does 2020 have in store for Aaron Chalmers?