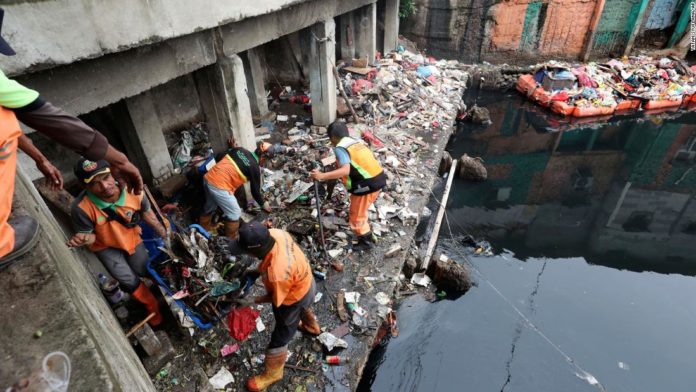 Jakarta and its surrounding areas have been pounded by torrential downpours since New Year’s Eve, causing flooding and landslides that forced thousands to flee their homes. More than 173,000 residents were seeking refuge on Friday, Indonesia’s state-run Antara news agency reported.
And it could get worse. Though the floodwaters have somewhat subsided around Jakarta, heavy rain and thunderstorms are forecast in the days ahead. Jakarta and the central area of Java, Indonesia’s most populous island, are expected to receive as much as 4 inches (102 mm) of rain in the next few days.
In the meantime, authorities and the Red Cross have started spraying the capital with disinfectant to stop the spread of waterborne diseases, said Agus Wibowo, a spokesman for the Indonesian National Disaster Mitigation Agency.
Images from Jakarta’s greater metropolitan area, which is home to about 30 million people, showed people wading through chest-high floodwaters and using inflatable rafts to navigate streets that had turned into rivers on the weekend.
More than 35,000 people in greater Jakarta are still staying in the government buildings, schools and malls that have been transformed into temporary shelters, Wibowo said.
In Bekasi City, which is just east of Jakarta, nearly 150,000 people were displaced, Antara reported.
Jakarta is one of the world’s fastest-sinking cities. It is particularly prone to flooding because it was built on swampy grounds. Experts say Jakarta’s growth and overpopulation has become unsustainable due to rising sea levels.
The current inundation is some of the worst the Indonesian capital has seen this century. Indonesia’s Meteorology, Climatology and Geophysical Agency measured 15 inches (38 centimeters) of rain at an East Jakarta airport on January 1, the highest flood reading since 1996, Reuters reported.
Experts have voiced concern that such extreme weather could become a new normal due to the climate crisis.
The Indonesian government is planning on moving the country’s capital to the island of Borneo to mitigate some of the problems Jakarta is expected to encounter due to climate change. That project is expected to take a decade and cost about $34 billion.