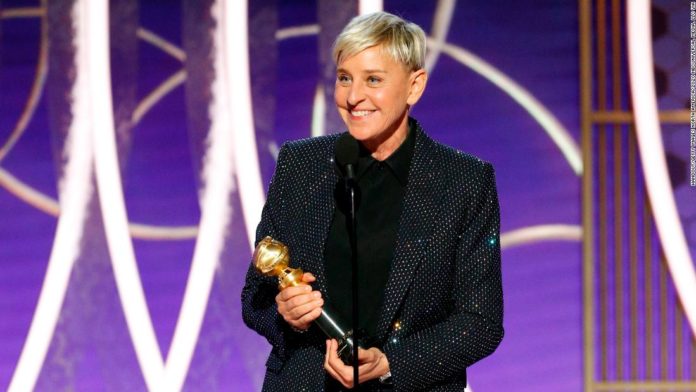 “All I’ve ever wanted to do is make people feel good and laugh, and there is no greater feeling than when someone tells me that I’ve made their day better with my show, or that I’ve helped them get through a sickness or a hard time in their lives,” she said. “But the real power of television, for me, is not that people watch my show, but people watch my show and then they’re inspired to go out and do the same thing in their own lives. They make people laugh or be kind or help someone that’s less fortunate than themselves. And that is the power of television.”
She added: “I’m so, so grateful to be a part of it.”
DeGeneres has hosted her popular daytime talk show “The Ellen DeGeneres Show” for 17 years.
Her standup career led to her 1990s comedy series “Ellen,” during which she became the first lead actor in a sitcom to come out as gay, a watershed moment for LGBTQ+ visibility.
The Carol Burnett Award was established in 2018.
The Hollywood Foreign Press Association, the group behind the annual awards ceremony, named the award in honor of the TV icon with the intention that it be presented every year to someone who “has made outstanding contributions to television on or off the screen,” according to a statement from HFPA in 2018.
Burnett, a five-time Golden Globe winner, accepted the inaugural award at the 2019 ceremony.
DeGeneres was introduced by “Saturday Night Live” star Kate McKinnon, who thanked the TV personality for giving her “a sense of self” as a young person.
“She risked her entire life and her entire career to tell the truth — and she suffered greatly for it,” she said. “Of course, attitudes change but only because brave people like Ellen jump into the fire to make them change.”