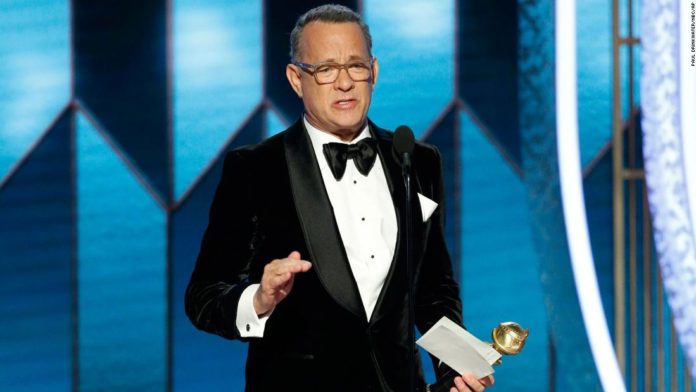 The actor, who was given the award by the Hollywood Foreign Press Association for what it said is his lasting impact on the film industry, had to take a moment to compose himself during his acceptance speech, particularly when paying tribute to his family.
“A man is blessed with a family sitting down front like that — a wife who is fantastic in every way, who has taught me what love is,” he said. “Five kids who are braver and stronger and wiser than their old man is. And, uh, a loving group of people who have put [up] with me being away months and months and months at a time.”
Blaming a cold for his state, he joked at one point after choking up, “It’s the cold that is making this happen. I swear to God, I’m not nearly this emotional at home.”
Hanks, an eight-time Golden Globe winner, was nominated this year for best supporting actor for his work in “A Beautiful Day in the Neighborhood,” in which he played TV icon Fred Rogers.
Past honorees include Oprah Winfrey, Barbra Streisand, Denzel Washington, Sidney Poitier, George Clooney, Martin Scorsese, Meryl Streep, and Steven Spielberg.