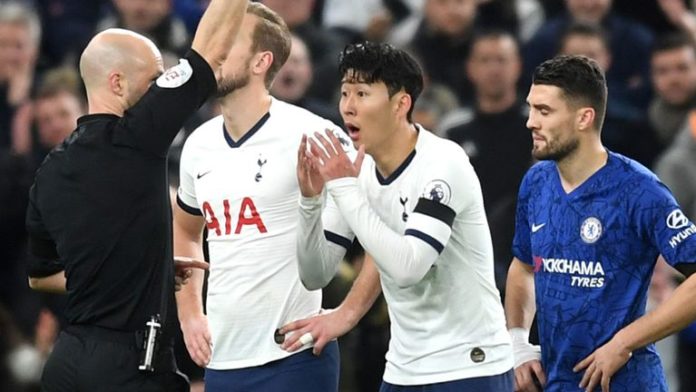 Son: “I am trying to learn something about this situation, three red cards is something I don’t want.”

Tottenham forward Heung-Min Son insists he has learned his lesson from his latest red card.

The South Korean was back involved for Spurs in the 1-1 FA Cup draw at Middlesbrough after serving a three-match ban for his dismissal against Chelsea before Christmas. Son kicked out at Antonio Rudiger and received a straight red card for the third time since May.

One of those was rescinded on appeal – the one at Everton where his tackle inadvertently led to Andre Gomes breaking his ankle – but all three were the result of petulance, having been fouled.

Spurs missed one of their star assets over the Christmas period and Son is not keen on it happening again.

“It has already passed, I don’t want to speak or think about it,” he said. “I just want to focus on what is coming, that is the most important thing.

“I am trying to learn something about this situation, three red cards is something I don’t want.

“It is not something I expected, but three red cards, it was painful. I will try and learn something from these situations.

“I was frustrated but I came back with happiness – but it was not the result we wanted. I am glad to be back, it was very painful to watch the team playing home and away on Boxing Day and New Year’s Day.”

Son suffered more frustration on his return as he struggled in the number nine role, filling in for the absent Harry Kane in the cup draw at Middlesbrough.

Kane looks set to be out for a couple of months with a hamstring injury and Son has called on his team-mates to help fill the void.

“Harry is one of the most important players in the team and I don’t want to see someone injured, especially your team-mate. Harry got injured and other players have to step up. It is important for other guys to get a chance and other guys to play the games.”