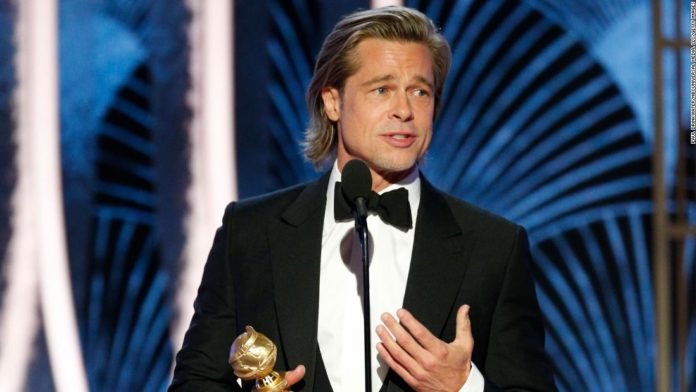 That’s why Pitt’s Golden Globes acceptance speech after his Best Supporting Actor win for “Once Upon a Time … in Hollywood” was such a hit.
In thanking his costar Leonardo DiCaprio, he slyly threw in “Still, I would have shared the raft.”
That “Titanic” reference is one of the most hotly contested bits of movie trivia ever.
DiCaprio, of course, portrayed Jack Dawson in the epic 1997 film.
For decades the debate has gone on and on as to whether (spoiler alert) Kate Winslet’s character Rose DeWitt Bukater could have saved Jack’s life in the icy waters by making room for him on the makeshift raft he insisted she climb upon.
The joke was celebrated on Twitter and even resulted in some memes — naturally.
Speaking of that which we can’t get over, Pitt also scored a zinger about his love life.
The actor thanked his parents who were at home and joked as to why his mom wasn’t with him at the awards show. “I wanted to bring my mom but I couldn’t, because anyone I stand next to, they say I’m dating,” Pitt teased. “And that would just be awkward.”
The camera went to Pitt’s ex-wife, Jennifer Aniston, who got in a laugh on that one.
The pair were married from 2000 to 2005 and have remained friendly. Every so often there are reports that they could get back together.
But that’s just another “friends” reunion we probably won’t ever get.