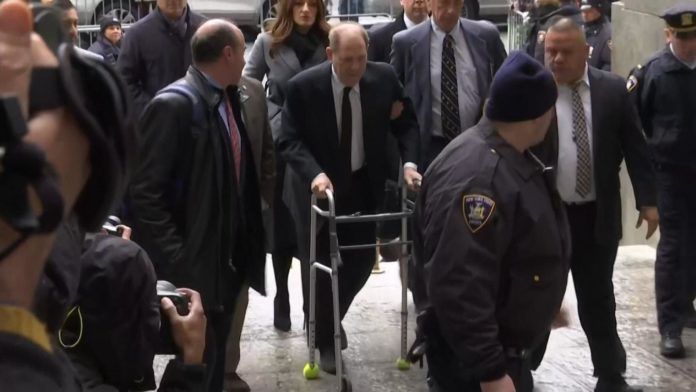 Harvey Weinstein has arrived at New York’s Supreme Court for the first day of his rape trial.

The 67-year-old is facing five charges including rape and sexual assault involving two women, which he denies.

He walked into the courthouse looking frail, and using a walking frame, which his lawyers say he needs following surgery for a back injury.

The Hollywood producer was first seen using the frame when arriving at court for a bail hearing in December.

He has previously spoken publicly of suffering ill health following the accusations.

New York‘s Supreme Court is expected to make its jury selection today, with the trial set to last around two months.

He will be in court every day, but is not expected to testify on his own behalf.

If convicted Weinstein could face a life sentence.

Dozens of women have made allegations of sexual abuse and harassment against Weinstein since the publication of revelations in the New York Times in October 2017.

High profile actresses including Gwyneth Paltrow and Angelina Jolie are among those who say the Oscar-winning producer behaved inappropriately towards them.

Rosanna Arquette, who says Weinstein derailed her career after resisting his advances, says she will attend court to support his alleged victims.

Actress Rose McGowan, another of Weinstein’s most prominent accusers, has said the trauma he caused her is so great she could not face being in court.

Weinstein’s case is largely seen to have kicked off the #MeToo and Time’s Up campaigns to support the victims of sexual misconduct.

At his trial, Weinstein faces charges that he raped a woman, who has not been identified, at a Manhattan hotel in March 2013.

He is also accused of forcing a production assistant into a sex act at his apartment in 2006.

Prosecutors in Los Angeles are reviewing eight cases of alleged sexual assault, although no charges have been filed.