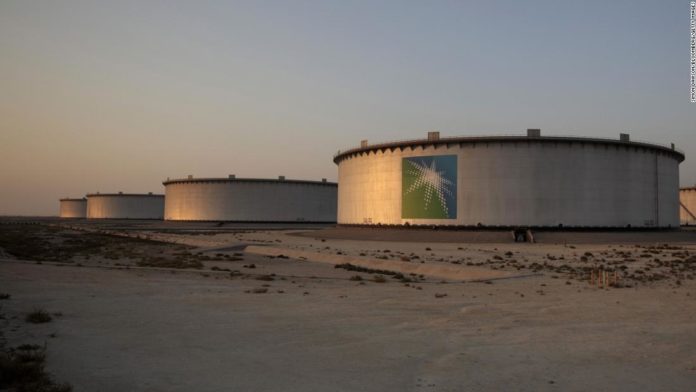 The stock has dropped roughly 2% since the killing of Quds Force commander Qasem Soleimani, reflecting concerns that Iran could respond to the attack by targeting the oil infrastructure of Saudi Arabia, a key American ally in the region.
Shares have dipped despite a surge in crude oil prices of as much as 6% since Thursday to near $70, which should help boost earnings at the world’s most valuable company.
Saudi Aramco shares have been trending lower since the days after the company pulled off the biggest IPO in history in December. The stock’s total decline since peaking on December 16 — a week after trading began — briefly topped 10% on Monday, wiping more than $200 billion off the company’s market value.
Investors are worried that Iran, which counts Saudi Arabia among its regional foes, could target the company’s production facilities or its computer networks in retaliation for the killing of Soleimani.
The killing of Soleimani gives rise to “uncharted geopolitical risks,” which will limit foreign investor appetite for Saudi Aramco, said Hasnain Malik, the Dubai-based head of equity strategy at Tellimer, an investment bank focused on developing markets.
One way Iran could retaliate is through cyber attacks, according to experts. The country has strong cyber capabilities, and it has previously been linked to attacks on major banks like JPMorgan Chase, Bank of America and Wells Fargo that made it difficult for customers to log into their accounts and access funds.
Saudi Aramco previously suffered one of the worst cyber attacks in history, when 35,000 computers were partially wiped or totally destroyed by hackers in 2012.
Another risk is an attack on the company’s infrastructure. The United States blamed Iran for a missile strike on Saudi Arabia in September that briefly took out roughly half of the kingdom’s oil production. Iran denied carrying out the attack.

When it comes to Saudi Aramco’s stock price, much depends on continued support from local and regional investors, said Malik.
The vast majority of investors who participated in the $25.6 billion IPO on December 11 were Saudi individuals, companies and institutions.
“Fundamentally, Aramco is massively overvalued,” said Anish Kapadia, director of energy at Palissy Advisors, who added that the company only managed to bring its IPO valuation near $1.7 trillion by limiting the amount of shares it sold and leaning on friendly local investors. “It was always going to be difficult for them to uphold that valuation,” Kapadia said.

The spike in oil prices may be short lived. If prices start to fall again, that would further pressure Aramco’s stock.
Analysts at Goldman Sachs said in a research note that increased risk is already reflected in crude prices, and a supply disruption would be necessary to sustain them near current levels.
“We therefore believe that price risks are skewed to the downside in coming weeks, with oil prices already trading above our fundamental fair value of $63 a barrel ahead of the recent events,” the analysts said.
— CNN Business’ Julia Horowitz contributed reporting.