Home Culture Why Taylor Swift presenting with Amy Poehler was kind of a big... 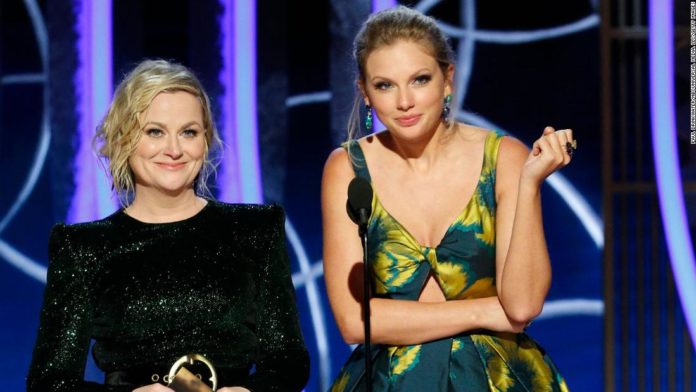 That’s because the pair have a bit of Globes history.
Seven years ago Poehler and her BFF Tina Fey co-hosted the Globes and poked some fun at Swift’s love life.
Sam Michael Fox, son of actor Michael J. Fox, was serving as a Golden Globes Ambassador that year and Fey jokingly waved Swift away from the younger Fox.
“You know what, Taylor Swift?” Fey said. “You stay away from Michael J. Fox’s son.”
“Or go for it,” Poehler deadpanned, to which Fey responded, “No, she needs some me-time to learn about herself.”
Swift was not amused.
In an April 2013 cover story for Vanity Fair she shot back.
“You know, Katie Couric is one of my favorite people,” Swift said. “Because she said to me she had heard a quote that she loved that said, ‘There’s a special place in hell for women who don’t help other women.'”
Swift refused to be “date shamed.”
“For a female to write about her feelings, and then be portrayed as some clingy, insane, desperate girlfriend in need of making you marry her and have kids with her, I think that’s taking something that potentially should be celebrated — a woman writing about her feelings in a confessional way — that’s taking it and turning it and twisting it into something that is frankly a little sexist,” she said.
Fast forward to 2020 and Swift is in a better place.
Not only has she squashed her beef with Katy Perry, but it appeared to be all love Sunday night with Poehler as well.
Poehler and Swift presented the award for best animated movie, which ultimately went to “Missing Link.”
“Amy and I are excited about this next category because we both love animation,” the “Cats” star said.
“Speak for yourself, Taylor,” Poehler said. “I like movies about people, by people.”