Home Sport Should Dean Elgar have been given out? 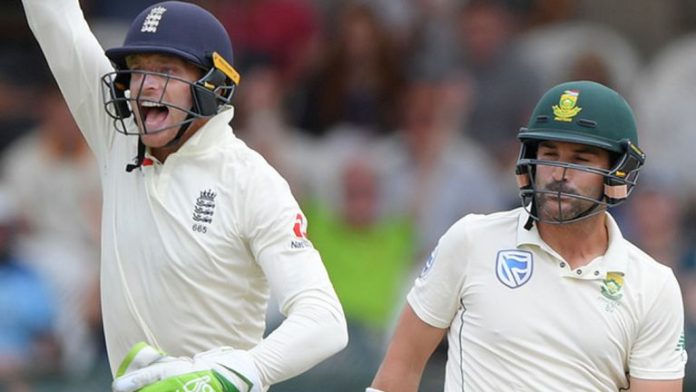 Should Dean Elgar have been given out on day four of the second Test between South Africa and England in Cape Town?

Dogged opener Elgar epitomised South Africa’s stubborn second-innings effort as they reached stumps on the fourth evening at Newlands on 126-2.

However, having put on a 71-run opening partnership to frustrate England’s front-line bowlers, Elgar eventually fell for 34 to a somewhat contentious decision, given out edging part-time legspinner Joe Denly through to the keeper.

He immediately reviewed the decision, but DRS seemed to show the faintest of nicks. So, did he hit it?

Dean Elgar: “No. I wouldn’t waste the referral knowing that I’ve nicked it – I don’t play cricket like that – I like to see myself as someone who’ll take their outs when they’re definitely out.

“It’s a bit of an emotional time when those kinds of things happen. Obviously I had to simmer down and, watching the footage, I can still right now say I haven’t hit it.

“I’m going to reserve my comments because I don’t want to get into trouble with the ICC but, as a player, I’m very confident I didn’t nick it.

“It is what it is, and so be it. It’s what creates the theatre of Test cricket, I guess. Sometimes you have those things go your way and sometimes they don’t.

“Unfortunately today, despite feeling a million dollars, it didn’t work out.”

Rob Key: “I don’t agree. I also don’t agree that you always, always know [as a batsman].

“When you hit the ground, hit your pads and the ball also then hits the outside edge, I’m not sure you can be 100 per cent. As soon as you feel yourself hit the ground, you just assume that’s what you’ve done – and it was such a faint nick.

“There’s some dismissals or decisions and you just think, that’s wrong. I don’t think this one is as cut and dried as that.

“I was fine with it. The faintest of nicks, I think. I actually think the technology did its job.

“You’ve got to take every single little bit of evidence. You don’t just look at UltraEdge and say there is movement on there. Do you see daylight between the two [bat and pad]? No, I don’t. Is there a spike mark? Yes, there is.

“Once you’ve put every little thing into it, then you can come to the conclusion that you haven’t got enough to overrule the on-field umpire. I thought it was out.”

Michael Atherton: “Instinctively, I don’t think Elgar hit that. He seems an honest chap, he says he didn’t hit it and I believe him.

“But the problem is, the umpire gave it out on the field. So what is the third umpire to do?

“There’s a little something there on UltraEdge, so I also have sympathy for the decision the third umpire made; only if there is absolutely incontrovertible evidence that the on-field umpire has made a mistake can he overturn it.

“But, instinctively, I think the on-field umpire got it wrong.”

Ebony Rainford-Brent: “We talk about umpires, the soft signal, and whether it’s worth it. I like it, because your gut feeling on the pitch sometimes is right – whether a catch has carried, whether there has been that little feather of an edge.

“He [Paul Reiffel] gave it out, and so my gut feeling was, going by what he saw, and going by all of the evidence, it was definitely out.

“Elgar is the one who could carry this whole innings, we’ve seen his class over the years. He is definitely the one to watch out for and they got rid of him when they needed to.”

Watch day five of the second Test between South Africa and England from 8am, Tuesday on Sky Sports Cricket.