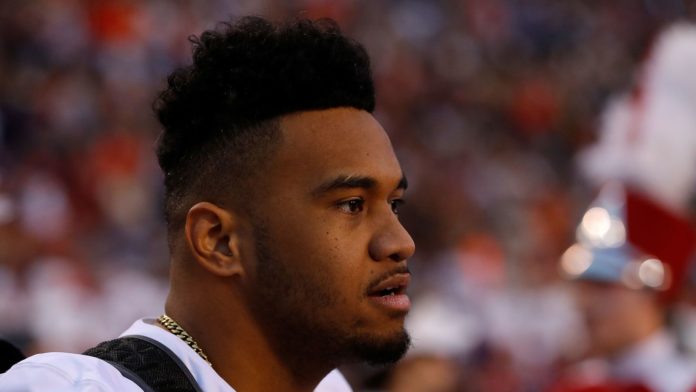 Tagovailoa remains a top prospect for the draft, despite undergoing surgery on dislocated hip suffered in November

Alabama quarterback Tua Tagovailoa has announced he will skip his senior year and enter the 2020 NFL draft.

Tagovailoa, who had been widely considered as a potential No 1 overall pick, dislocated his hip in November which sparked speculation he could see out his final year of college before making the step to the NFL.

But, speaking at a news conference on Monday, Tagovailoa said he had made “the really hard decision” after speaking with his parents, coaches and doctors.

Tagovailoa says he is “optimistic” of playing next season, however there is no conclusive time frame around his recovery and it is unclear if he will have a chance of proving his fitness to NFL scouts before the draft.

“It’s a unique situation,” he said. “With my hip, a lot of the guys and general managers and owners that I’ve gotten to talk to have said the same thing.

“They kind of look at this injury as a knee injury almost, even though it’s not, in a way that, ‘Are we going to take a chance on this guy or would he be able to possibly do a pro day before the draft?’.

“The biggest thing they want to see is that we can move and be back to how we were playing prior to the injury.”

Alabama’s team orthopedic surgeon has told ESPN that Tagovailoa would not be able to resume athletic activity until around mid-February and will not be ready to begin throwing again until sometime in the spring.

It remains to be seen whether he will be physically fit enough to participate in a pro day, but Tagovailoa says he will wait to make a call based on medical advice.

“I don’t think any of the doctors can tell the foreseeable future,” he added.

“None of the guys rehabbing me can tell that. From what they’ve seen in New York, everything looks good. But you can’t really tell until the three-month mark or the four-month mark. That’s the gauge.”

The Miami Dolphins are expected to show a keen interest in Tagovaiola with their fifth pick – if he drops down that far.